World Cup 2022: Argentina and France meet in the final at the Lusail Stadium

Can Lionel Messi win a World Cup with Argentina or will Kylian Mbappe help France to win back-to-back tournaments?

Messi, 35, has won a record seven Ballon d’Or awards – presented to the best player in the world – but never won the biggest team prize in football.

“People say France are favourites, but we have the advantage of having the greatest player of all time,” said Argentina goalkeeper Emiliano Martinez.

“We always like to hear the opponent is the favourite because we don’t feel superior or inferior to anyone.

“But, as I always say, we have the greatest player of all time. And with a good defence, we have many chances to reach our goal.”

France manager Didier Deschamps captained his country to World Cup victory in 1998 and then, as boss, guided them to another success in Russia four years ago.

He said: “I know Argentina, many people around the world, and maybe some French people, hope Lionel Messi could win the World Cup, but we’re going to do everything to achieve our objective.”

The final sees the tournament’s top two goalscorers go head-to-head in the race to win the Golden Boot. Both Messi and Mbappe have scored five times in Qatar, while France’s Olivier Giroud and Argentina’s Julian Alvarez are one goal behind on four.

Messi helped Argentina reach the 2014 final in Brazil, although Germany’s Mario Gotze scored the only goal as the Europeans won 1-0 after extra time.

But the Paris St-Germain player has been the driving force in Argentina’s campaign in Qatar.

He converted an early penalty in their first match before his country fell to a shock 2-1 loss to Saudi Arabia and then scored in the vital 2-0 win over Mexico. Argentina’s 2-0 defeat of Poland saw them top Group C, with Messi also on target in the 2-1 last-16 win over Australia.

Argentina looked in control against the Netherlands in their quarter-final as they led 2-0 after 82 minutes, but the Dutch scored twice through Wout Weghorst, including an equaliser in the 11th minute of injury time to take the tie to extra time.

It eventually went to penalties but Martinez saved two spot-kicks as Argentina advanced, before a goal from Messi and two from Manchester City’s Alvarez gave them a routine 3-0 win over Croatia in the semi-finals.

Argentina have won the tournament twice, on home soil in 1978 and in Mexico in 1986, and are looking for their third success on Sunday.

“I’m already getting emotional because they’ve given everything sincerely,” said manager Lionel Scaloni. “Let’s hope we win the title and if it can’t be, they should be proud, because it’s a moment to enjoy.” 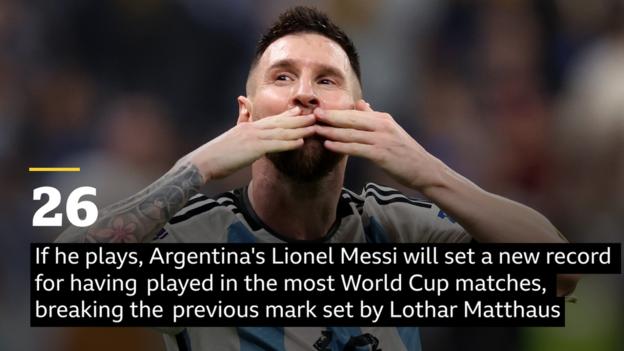 Mbappe, 23, is chasing his second World Cup success and has been instrumental in guiding France to the final. He scored once in their 4-1 win over Australia and twice in the 2-1 victory over Denmark as France reached the last 16 with a game to spare.

That enabled Deschamps to rest players and, despite losing 1-0 to Tunisia, they won Group D, with Mbappe on target twice more in the 3-1 last-16 triumph over Poland.

In the quarter-finals they faced Gareth Southgate’s England and took the lead through Aurelien Tchouameni, but Harry Kane equalised with a penalty. Olivier Giroud put France ahead and they won it 2-1 after Kane missed a second spot-kick.

France beat the tournament’s surprise packages Morocco 2-0 in the semi-final to reach their fourth World Cup final in seven tournaments, having won the competition in 1998 and 2018 and losing in the final in 2006.

But their preparations have been hampered with a sickness bug.

Midfielder Adrien Rabiot, defender Dayot Upamecano and winger Kingsley Coman have been among those struggling with illness.

“We’ve had a few cases of flu-like symptoms,” said Deschamps. “We’re trying to be careful so it doesn’t spread and players have made great efforts out on the pitch and obviously their immune systems suffer.

“We’re taking all necessary precautions, trying to make sure it doesn’t spread but we have had to take precautions against it.”