Premier League at 30: How football has changed

Next week marks the 30th anniversary of the Premier League replacing the Football League First Division at the top of the English football tree.

Here is what has happened in those 30 years and how the Premier League and the world has changed.

The Premier League’s 30 years in numbers 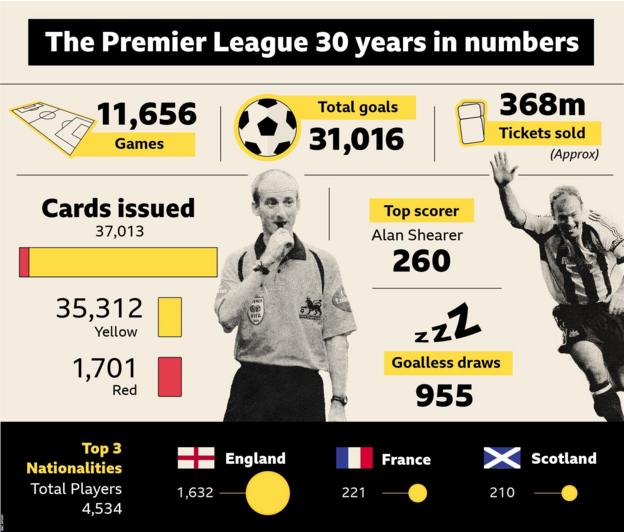 There have been 4,534 players in the Premier League, with 120 different nationalities. England leads the way with 1,632, with France second on221 and Scotland third on 210.

More players have been shown a card – 3,217 (71% of players) – than have scored a goal. There have been 35,312 bookings and 1,701 red cards. Richard Dunne, Duncan Ferguson and Patrick Vieira were responsible for eight of those reds each. Gareth Barry’s 123 yellows is a record.

There have been 50 different clubs in the Premier League, with seven winning the title at least once – and 42 teams being relegated. Manchester City, Blackburn and Leicester have done both.

And managers? There have been 265 so far, including caretakers. The most recent were Steve Cooper and Erik ten Hag on the opening weekend.

Six managers have 100% win rates from short caretaker spells, with Pat Rice winning all three games with Arsenal in 1996 before Arsene Wenger’s arrival. Of full-time managers, Pep Guardiola has the best win rate – 74%.

Eighteen managers lost all their games. Fifteen were caretakers… and Frank de Boer got sacked as Crystal Palace boss after four defeats in four games. Nottingham Forest’s Cooper and Manchester United’s Ten Hag are the others, so they will hope to see that number drop to 16 again soon…

And how many fans have witnessed all of this live? Premier League matches have a combined attendance of 368 million. A lot will be the same people, of course, but you know what we mean…

Can you name the player involved each time the Premier League transfer record was broken?

How has the Premier League changed? 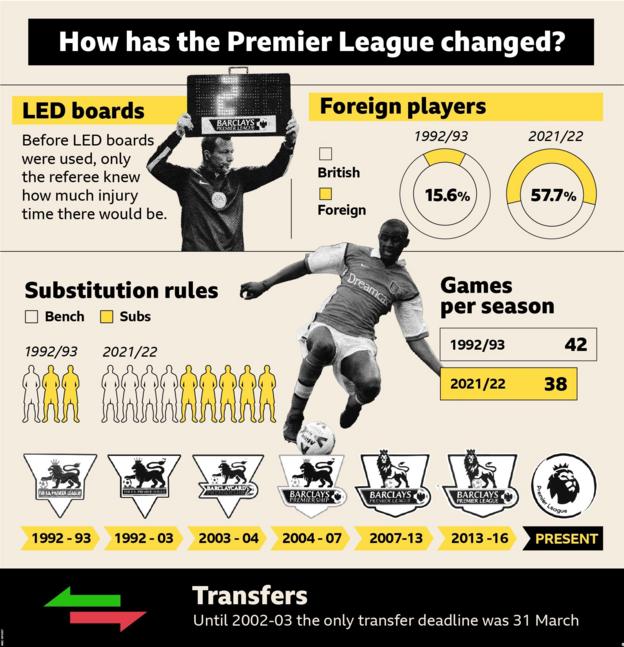 It is fair to say things have changed dramatically since the 1992-93 season.

When the Premier League started, the backpass rule had just been brought in. Until 1992 goalkeepers could pick up the ball when a team-mate played it back to them.

That led to a lot of confusion in the opening weeks, with defenders and keepers not sure what to do in tight spaces.

There have been plenty of other changes over the years.

Tackles from behind were only outlawed in 1998 and in recent years rules around goal-kicks, kick-offs and drop balls have been changed too.

Also, when the Premier League started, only the referee knew how much injury time there would be. The fourth official putting up the board with the amount of added time is a relatively new thing.

The number of substitutes allowed has increased. In the opening Premier League season, teams could name three subs on the bench in each game and bring on two. This season it is five subs and nine-man benches.

But while benches have grown, the league has shrunk. There were 22 teams in the opening three seasons – with 42 games per team – before the current format of 20 teams and 38 games came in from 1995-96.

European places have changed too. Believe it or not, kids, only the champions qualified for the Champions League until 1997.

So in the first Premier League season, Manchester United won the title to qualify for the Champions League, Arsenal went into the Cup Winners’ Cup by winning the FA Cup and Aston Villa and Norwich went into the Uefa Cup.

Now seven teams qualify for Europe, the Cup Winners’ Cup is gone, the Uefa Cup is called the Europa League and there is a Europa Conference League. The Intertoto Cup has been and gone.

Every game being played at the same time on the final day feels normal now, but that was not always the case. In 1992-93 there were nine games on the final Saturday and two on the Sunday – plus another two rearranged games on the Tuesday.

That is partially down to the Bosman ruling. Until 1996, clubs could only name three foreign players in a European game, meaning teams were less inclined to have too many non-British players in their side.

Manchester United did not let Steve Bruce play for the Republic of Ireland at the 1994 World Cup because he would have counted as a foreigner in the Champions League.

Another one that might surprise the youngsters reading is that until 2002-03 the only transfer deadline each season was 31 March.

No Jim White/Sky Sports News/countdown clock extravaganzas twice a year. Teams could sign players all through the season until the final couple of months.