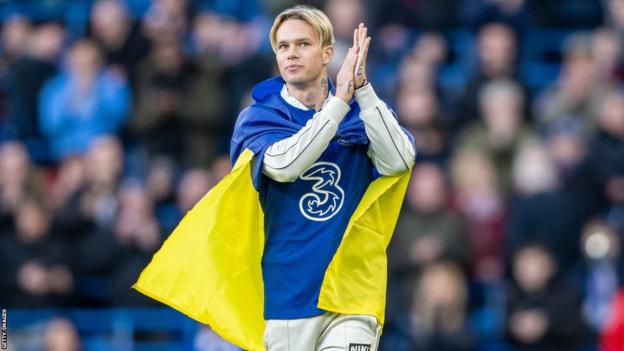 Shakhtar Donetsk president Rinat Akhmetov has pledged to donate £22m to the Ukrainian war effort following the transfer of Mykhailo Mudryk to Chelsea.

Akhmetov said the money would help a project named ‘Heart of Azovstal,’ aimed at “helping Mariupol defenders and the families of fallen soldiers”.

Ukraine was invaded by Russia in 2022.

“I want to thank the entire civilised world for helping Ukraine,” said Akhmetov.

“Today we are able to talk about Ukrainian football thanks to the Ukrainian army, the Ukrainian people, and the tremendous support of the entire civilised world.”

Akhmetov said he had “mixed feelings” about Mudryk, 22, leaving Shakhtar for Chelsea.

“I have never made it a secret that my dream is to win European trophies,” he said.

“This means that players like Mudryk should be invited to our club, to our Ukrainian championship, and we should win European trophies with such players.

“Unfortunately, it is impossible now, as Ukraine is fighting the horrendous and unjust war waged against us by the Russian Federation.”

The Shakhtar president said money from Mudryk’s transfer fee would go towards providing medical and prosthetic treatment, psychological support and meeting specific requests in order to help Mariupol defenders and the families of fallen soldiers.

“Their acts of bravery are unparalleled in the modern history,” Akhmetov said.

He also said Shakhtar would play a friendly against Chelsea at Donbass Arena in Ukraine.

Mudryk, 22, joined the Blues on an eight-and-a-half-year deal, but had looked set to sign for Premier League rivals Arsenal before he completed the move to Stamford Bridge.

Asked about the negotiations which saw the Blues beating Arsenal to the signing, Potter told BBC Radio 5 live after the Blues’ win on Sunday: “We’re delighted he is here, I’ve no idea in terms of how it’s happened.

“I’ve been focusing on the game, as you can imagine, but he’s an exciting player – a player with real quality, a young player that will need time to adapt to the Premier League and to us, but we’re delighted to have him.”

Todd Boehly, who led an American consortium in taking control of Chelsea in May last year, has recently stepped down from his role as interim sporting director, allowing new technical director Christopher Vivell and director of global talent and transfers Paul Winstanley to take a leading role in recruitment.

Mudryk is Chelsea’s fifth signing of the January transfer window following the arrival of Joao Felix on a loan deal from Atletico Madrid, plus the permanent signings of Benoit Badiashile, David Datro Fofana and Andrey Santos.

Until this season Mudryk had only scored two goals in 47 appearances for three different clubs in Ukraine, but he increased his stature in this season’s Champions League, scoring three goals in six games for Shakhtar.

He could make his debut appearance for the Blues in the Premier League against Liverpool, who sit one position above 10th-placed Chelsea, at Anfield on Saturday.