Treatment for gout includes pain relief to help you cope with a gout attack, as well as medication and lifestyle changes to prevent further attacks.

Pain relief for a gout attack

What to do during an attack

Non-steroidal anti-inflammatory drugs (NSAIDs) are usually recommended as the first treatment for gout. They work by reducing pain and inflammation during an attack. NSAIDs used to treat gout include naproxen, diclofenac and etoricoxib.

If you’ve been prescribed NSAIDs, it’s a good idea to have them with you at all times so you can use them at the first sign of a gout attack. Continue to take your medication throughout the attack and for 48 hours afterwards. Your GP may also prescribe a medication called a proton pump inhibitor (PPI), to take alongside your NSAID. This reduces the risk of the NSAID causing stomach ulcers and bleeding from the stomach.

If you’re unable to take NSAIDs or if NSAIDs are ineffective, a medicine called colchicine can be used instead. Colchicine reduces some of the swelling and pain associated with a gout attack. It’s best to have it with you at all times so you can use it at the first sign of a gout attack. Your GP will tell you how long to take it for and how often.
When taken in high doses, side effects of colchicine include feeling sick, abdominal (tummy) pain and diarrhoea. 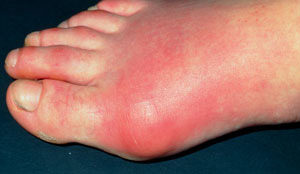 Corticosteroids are sometimes used to treat severe cases of gout if other treatments don’t work or you’re unable to take an NSAID or colchicine. A short course of steroid tablets often provides relief, but they can’t be used long-term in high doses as they cause side effects, including:

Corticosteroids can also be given by injection to provide rapid pain relief. This can be either into a muscle, a vein or directly into the affected joint.

You can reduce your chances of having further gout attacks by taking medication and making lifestyle changes to reduce the level of uric acid in your body.

Medication to reduce uric acid levels – known as urate-lowering therapy (ULT) – is usually recommended if you have recurrent attacks of gout or you have complications of gout. Most people with gout will eventually need to have ULT, so you may want to discuss the advantages and disadvantages of this treatment with your doctor as soon as you’ve been diagnosed with gout.

They should explain that while ULT can significantly reduce your risk of having further attacks, the medication needs to be taken on a daily basis for the rest of your life and there’s a small risk of side effects. If you decide to start ULT, a medicine called allopurinol is usually tried first. If this isn’t suitable or doesn’t work, other medications may be used instead. These medications are described below.

Allopurinol helps reduce the production of uric acid. It can help prevent gout attacks, although it won’t help relieve symptoms during an attack. Allopurinol is a tablet taken once a day. When you first start taking it, your dose will be adjusted to make sure the level of uric acid in your blood is low enough. Regular blood tests will be needed to monitor this until the most effective dose is found.

Allopurinol can sometimes cause a gout attack soon after you start taking it and it can take up to a year or two before no further attacks occur. It’s important to persevere with treatment even if you do have attacks during this time. To help relieve attacks, your doctor will prescribe one of the pain relieving medications described above to take alongside your allopurinol at first. Most people taking allopurinol won’t experience any significant side effects. However, side effects can include:

Like allopurinol, febuxostat is a medication taken once a day that reduces the body’s production of uric acid. It’s often used if allopurinol isn’t suitable or causes troublesome side effects. As with allopurinol, febuxostat can make your symptoms worse when you first start taking it. Your doctor will initially prescribe one of the pain relieving medications described in case you experience attacks.

Side effects of febuxostat can include:

Less commonly used ULT medications include benzbromarone and sulfinpyrazone. These types of medication tend to only be used if people are unable to take allopurinol or febuxostat. They need to be prescribed under the supervision of a specialist.

Certain lifestyle changes can also help reduce your risk of experiencing further attacks of gout, including:

There’s some evidence to suggest that taking regular vitamin supplements can reduce gout attacks, although the effect may only be small. Talk to your GP first if you’re thinking about taking vitamin C supplements, as they aren’t suitable or safe for everyone.