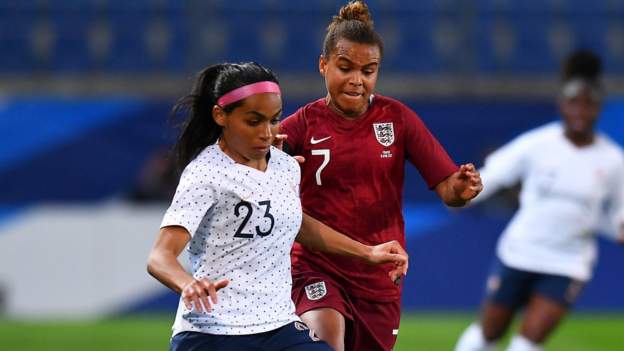 Fran Kirby’s penalty was England’s only reward as they lost 3-1 to France in an entertaining friendly.

Goals in each half from Sandy Baltimore and Viviane Asseyi put the hosts in control in Caen.

A minute’s silence was held before kick-off and the England players wore black armbands to mark the death of Prince Philip , the Duke of Edinburgh.

In world number three side France, England faced a team ranked in the world’s top 10 for the first time since March 2020.

Temporary boss Hege Riise, who is also leading Team GB at this summer’s Olympics, is likely to have taken a lot from their attacking display, with the Lionesses creating a host of chances only to be denied by a fine performance by goalkeeper Peyraud-Magnin.

However, they looked vulnerable at the back without the injured Steph Houghton and Lucy Bronze.

Kadidiatou Diani had already gone close before her fine run and cutback set up Baltimore to power the ball into the top corner from the left side of the penalty area for the opener.

In the second half, Diani’s looping long-range effort hit the bar before Rachel Daly tangled with Elisa de Almeida as they chased the rebound to concede a penalty.

Asseyi, who had only been on the pitch a matter of minutes, sent Ellie Roebuck the wrong way to double France’s lead.

Manchester City’s Lauren Hemp impressed as a substitute and won a penalty which Kirby confidently converted, but another rapid breakaway from France resulted in Katoto tapping home from yet another dangerous low cross from the impressive Diani.

England’s next match is against Canada in Stoke on Tuesday, a match you can watch live on BBC Four, BBC iPlayer and the BBC Sport website.