It’s probably a bit too early but I just can’t help it – I am already thinking about who Wales might get in the last 16 at Euro 2020.

I was talking to him about where we might end up finishing in Group A, what stadium we will play at next and when, and who we might come up against.

I know, I know – we are not into the knockout stages yet but, just like at Euro 2016 when I was on that journey myself, it is exciting to think about it and we can do it because we are in such a strong position with four points from our first two games.

Why this was an extra-special Wales win

From a Wales perspective, it feels like our tournament has started now.

Everything about this win over Turkey was different to Saturday’s draw with Switzerland, and not just the way we played.

Obviously the performance was so much better this time, but just seeing the boys celebrate afterwards, with a little circle together on the pitch and then going over to the fans, reminded me of France five years ago and made me think we are up and running at Euro 2020.

Everything I’d said before the game I wanted to see in Baku, happened. We started on the front foot, played with confidence and took the game to Turkey. We showed we could play some football, and we also did the other side of things extremely well and stood up to them defensively.

We didn’t just beat Turkey in a must-win game, we basically beat them in their own backyard, in front of 30,000 of their fans and it was so hot out there as well.

It was a display that showed everyone what Wales are all about and I am delighted about that.

For all of those reasons it was a great win anyway, but add in what it means to our chances of getting out of Group A, and it makes it extra special.

This wasn’t a straight knockout game but the scenario wasn’t far off it. At 1-0 we knew that, if we held on, we were near enough through, but a Turkey equaliser would have totally changed things. We would have been left needing to go and beat Italy in Rome in our final group game to get to the last 16.

The pressure was right on the players but, across the board, they responded and answered all the questions that were being asked about the team after that Swiss game.

So did the manager, Rob Page. When he named exactly the same side that struggled in game one, I think some eyebrows were raised around Wales – they were in the BBC studio anyway – because we expected some changes.

But Page got all the big calls right. To a man, the whole team all did brilliantly. Compared to the Switzerland game it was far more like the kind of performance I’d expect from a Wales team in a huge game in a major tournament.

2016 team want their achievement to be beaten

We needed performances from our “big” players, and boy did we get them. We hardly saw Gareth Bale and Aaron Ramsey line up together in qualifying because of injuries but they were at their best in Baku.

They were both superb and, personally, what I really enjoyed was seeing two of my friends linking up so many times together the way I know they can.

For as long as I’ve played with them, which is more than a decade now, they’ve always been like that. They both knew what each other was going to do, and Ramsey’s early movement made him so hard for defenders to stop.

Right from the start I was buzzing from our performance – firstly from the way we attacked Turkey playing attractive football, and then with the way we kept them out when they came at us. We earned that win and I’m proud of all the Wales players for the way they got it.

I’ve been able to tell a few of them that myself because I am in a WhatsApp group with the core of the 2016 squad, which includes people who are with Wales again now, like Gaz [Bale], Rambo [Ramsey], Joe Allen and Wayne Hennessey.

The rest of us are all right behind them, wherever we are watching on.

Not that it was ever really in doubt, because I know them all so well, but what’s been obvious from the messages going back and forth is that none of the 2016 team who reached the semi-finals are saying they want to keep the glory and see our record of getting so far stand a little longer.

If this Wales team bettered that achievement, then everyone would be happy – especially people who have retired, like me.

We have all turned into fans now, but not only that we have some of our best mates playing at this tournament.

I’m in touch with a lot of them, including some of the newer boys who weren’t in France five years ago, and some of the coaching and medical staff who were.

As you’d expect, everyone is pulling together. It’s great to see the same spirit that took us so far last time is still there in the squad. Long may it continue.

I would not want to miss the Italy game

Wales head for Italy now, and our final group game on Sunday. We can play with freedom in that one, and Page even has the option to rest some players.

There are two ways to approach it – we either go for it and try to get a famous victory, which will always be remembered and would put us top of the group, or we rest a few players and use some squad members who need minutes in their legs.

On the face of it, that probably sounds more sensible but, looking at the schedule, if Wales do make it to the knockout stages they will have six days between that Italy game and their last-16 tie if they finish first or second in Group A, and even longer if they finish third. 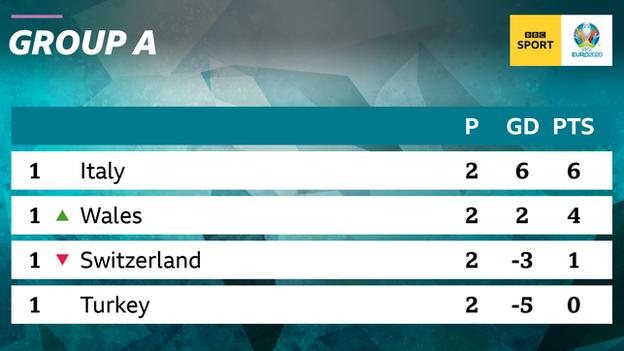 Bearing that in mind, I’m not sure I’d completely rest too many players. Anyone who played in the Turkey game on Wednesday who misses the Italy game might not play again for between nine and 12 days.

That could have an adverse effect for people who came into the tournament short of match sharpness. Page has got to make that call, and he will have to talk to his players to see who wants to carry on.

If it was me, I would not want a rest. I would be saying to the manager that I am playing every game in these Euros because I might never get back to another one.

Also, this is not just any old game. We are talking about taking on Italy in Rome, in the European Championship – I can’t think many players will be putting their hand up and volunteering to miss that one. Everyone will be saying ‘bring it on’, I know I am.