England v Germany at Euro 2020: ‘Time for England to redefine their biggest rivalry’ 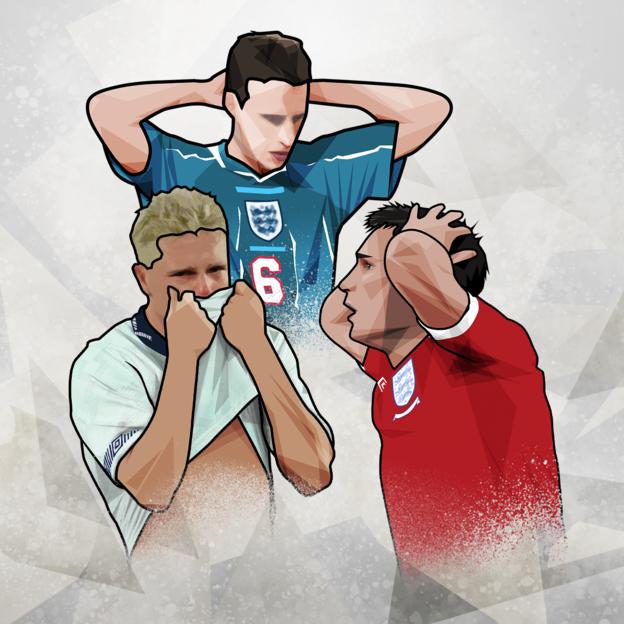 In England, football hurt is measured in years.

There have been 55 since the country’s international zenith in 1966, when Geoff Hurst smashed in three, Nobby Stiles danced a jig and Bobby Moore sat atop shoulders with the World Cup trophy firmly in his grasp.

Germany (then West) were there that day, watching as England celebrated. They have been present ever since, regularly making amends for their 4-2 loss, inflicting pain and fostering English resentment.

‘Inevitable’ was the word used by many when a frantic finale to Euro 2020 Group F finally concluded with Joachim Low’s team as England’s last-16 opponents.

Four times England have met Germany in the knockout rounds of a major tournament since 1966. Four times they have lost, often edged out, occasionally unlucky, always anguished. Less a series of defeats, more a recipe for a national existential crisis.

Generations of England fans have their own mental play-list of major tournament trauma and grief, with Germany the chief antagonist.

Generation Z have Frank Lampard’s shot landing a good foot behind the line at the 2010 World Cup, early Millennials and Gen X are cursed with the double whammy of two penalty shootout losses, of a crestfallen Chris Waddle in 1990, a gutted and grey Gareth Southgate in 1996 and a weird hybrid of two Gazzas, tears flowing as he stretches in vain to divert a ball home.

The poor Baby Boomers have all of the above with an added dash of Uwe Seeler’s logic-defying backward header and Gerd Muller’s point-blank volley on a sun-scorched Mexican pitch in 1970.

The propensity in some areas for drawing on crass references to the two World Wars and xenophobic cliches about beach towels and sun loungers have not helped.

But while venom continues among some on one side, there is often bemusement on the other.

England’s antipathy towards the German team is largely unrequited. That is not to say Germans do not care about playing England, they just have bigger fish to fry, usually en route to yet another final. And there are few things more embarrassing to an aggressor than finding your ire met with apathy.

“I would never describe England as Germany’s biggest rivals,” former player Dietmar Hamann told the Daily Telegraph this week. “Our big rivals have always been seen as the most likely to challenge us.”

Time, though, is a great healer, in more ways than one.

It is 11 years since the last meeting, and almost 20 since the Three Lions were actually competitive in a fixture that mattered against Germany – the 5-1 win in Munich, and even then, that was only a qualifier for a World Cup in which the Three Lions would again flop. Germany would go on to reach the final, obviously.

England has whole new generations of football supporters untarnished by traumatic losses; who now see only benign clips on YouTube that occurred when people had funny clothes and even funnier haircuts. Iceland and Croatia have inflicted greater pain on them.

They are taught about the past but when they look at present Germany they see a country of social progression, multi-culturalism, maturity, industry, health and hope. Teenagers and 20-somethings flock to Berlin, Hamburg and Munich to sample the nightlife.

Our young footballers are also moving there in ever-increasing number in search of opportunity. Two – Jude Bellingham and Jadon Sancho – owe their place in this England squad in large part to the chances handed to them at Borussia Dortmund.

Bellingham and Sancho are emblematic of the kind of young player now prevalent in the England set-up – one that is open to experience and education, to different cultures and ways of coaching.

Those who have not lived in Germany travel there every season for Champions League games and play alongside internationals from across Europe with their club sides.

At an average age of 25, with Kyle Walker the oldest at 31, they, like their peers, are untouched by the trauma of Euro 1996 and before. For many, 2010 will only be a hazy childhood memory.

Crucially, though, there is a man in the England camp who knows better than most the pain of losing to Germany in a major tournament.

Gareth Southgate’s entire tenure as England boss has felt like a riposte to his own painful, personal denouement to Euro 96.

His tactical approach, especially at this summer’s Euros, is designed to minimise risk, maximise talent; to attempt, through solidity and pragmatism, an eradication of the possibility of anything as unpredictable as a penalty shootout.

What he has fashioned is an England side with qualities more often associated with the best Germany have fielded – it is calm, calculated and almost robotic in its ruthlessness.

Germany, meanwhile, arrived at this tournament in turmoil, with muddled squad selection, a lack of direction and a coach on his way out.

They survived on their wits in the group stage, when they were six minutes from elimination by Hungary, scraping through via a combination of determination and flashes of brilliance from talented individuals.

Southgate is perhaps more attuned than any England manager in living memory to the representative quality of the national squad and the obligations that come with this.

During the run to the 2018 World Cup semi-finals he spoke of the emblematic quality of his young, diverse, socially conscious squad.

Following the recent debate about his side taking the knee before games in support of racial equality, he wrote an open letter in The Players’ Tribune titled ‘Dear England’, in which he eloquently addressed the responsibility on he and his players, and the mutually beneficial relationship between the national team and its fans.

On Tuesday, he will simply send his side out to win a football match. But by doing so this young team can take another big step in its progression and redefine what facing Germany means for a whole new generation, away from fear and negativity and into something joyful and positive.

Could this be the moment England stop looking backwards and start to move on?