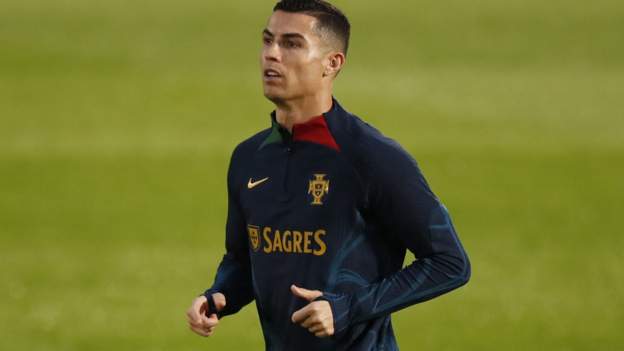 Manchester United forward Cristiano Ronaldo says the club’s owners, the Glazer family, “don’t care about the club” on the sporting side.

“Manchester are a marketing club – they get money from the marketing,” he said.

“It will be hard for Manchester to be top of the game in the next two or three years.”

The 37-year-old Portugal forward, who has only scored one Premier League goal this season, said: “The owners of the club, the Glazers, they don’t care about the club, professional sport.”

Ronaldo added that he has never met the Glazers, who took over the club in 2005.

United’s only public response to the Ronaldo interview was issued earlier on Monday, when the club said: “Manchester United notes the media coverage regarding an interview by Cristiano Ronaldo. The club will consider its response after the full facts have been established.

“Our focus remains on preparing for the second half of the season and continuing the momentum, belief and togetherness being built among the players, manager, staff, and fans.”

Fans have staged a number of protests against the Glazers’ running of the club, who last won a trophy with the Europa League in 2017.

“You have some things inside the club which don’t help Manchester reach the top level like City, Liverpool and even now Arsenal.

On the Sunday section of the interview, Ronaldo was asked if he was angry that he had been criticised by former United team-mate Wayne Rooney – who now manages DC United.

Ronaldo said: “Probably, because he finished his career in his thirties. So, I’m still playing at a high level. I’m not going to say that I’m looking better than him, which is true, but…”

In Monday’s segment, he turned his attention to another old United colleague – Gary Neville.

He recently blanked the former England right-back, who was working as a Sky Sports pundit.

“It’s hard to listen to that kind of criticism and negativity about people who play with you. For example, Gary Neville, as well. They are not my friends,” said Ronaldo.

“It’s easy to criticise. I don’t know if you have a job in television that they must criticise to be more famous, I really don’t understand.

“I think they take advantage of [my profile] because they are not stupid. It’s hard when you see people who were in the dressing room with you criticising that way.”

In the previously released section of the interview, Ronaldo – who earns £500,000 a week – claims the club are trying to force him out and he does not respect manager Erik ten Hag.

Ronaldo scored 118 goals for United between 2003 and 2009 and his return in the summer of 2021 was celebrated by the club fanbase – although he seems to have alienated a large section of them with this interview, which will be shown in full this week.

He is currently with the Portugal squad for the World Cup in Qatar.