Breast cancer is the most common type of cancer in the UK.

If it’s treated early enough, breast cancer can be prevented from spreading to other parts of the body. 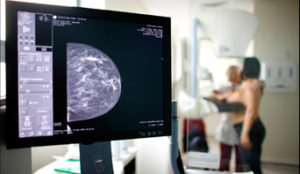 The breasts are made up of fat, connective tissue and thousands of tiny glands called lobules, which produce milk. When a woman has a baby, the milk is delivered to the nipple through tiny tubes called ducts, which allow her to breastfeed.

The body is made up of billions of tiny cells, which usually grow and multiply in an orderly way. New cells are only produced when and where they’re needed. In cancer, this orderly process goes wrong and cells begin to grow and multiply uncontrollably.

Breast cancer can have a number of symptoms, but the first noticeable symptom is usually a lump or area of thickened breast tissue.

Most breast lumps aren’t cancerous, but it’s always best to have them checked by your doctor. You should also see your doctor if you notice any of the following:

After examining your breasts, your doctor may refer you to a specialist breast cancer clinic for further tests. This might include a mammography (breast screening) or a biopsy. Read More About: Breast Screening and How Breast Cancer is Diagnosed.

There are several different types of breast cancer, which can develop in different parts of the breast. Breast cancer is often divided into non-invasive and invasive types.

Non-invasive breast cancer is also known as cancer or carcinoma in situ. This cancer is found in the ducts of the breast and hasn’t developed the ability to spread outside the breast.

This form of cancer rarely shows as a lump in the breast that can be felt, and is usually found on a mammogram (see below).The most common type of non-invasive cancer is ductal carcinoma in situ (DCIS).

Invasive cancer has the ability to spread outside the breast, although this doesn’t necessarily mean it has spread.

Other Types of Breast Cancer

Other less common types of breast cancer include invasive lobular breast cancer, which develops in the cells that line the milk-producing lobules, inflammatory breast cancer and Paget’s disease of the breast.

It’s possible for breast cancer to spread to other parts of the body, usually through the lymph nodes (small glands that filter bacteria from the body) or the bloodstream. If this happens, it’s known as “secondary” or “metastatic” breast cancer.

About one in eight women are diagnosed with breast cancer during their lifetime. There’s a good chance of recovery if it’s detected in its early stages. For this reason, it’s vital that women check their breasts regularly for any changes and always get any changes examined by their doctor.

Mammographic screening (where X-ray images of the breast are taken) is the best available method of detecting an early breast lesion. However, you should be aware that a mammogram might fail to detect some breast cancers. It might also increase your chances of having extra tests and interventions, including surgery.

Women with a higher-than-average risk of developing breast cancer may be offered screening and genetic testing for the condition.

As the risk of breast cancer increases with age, all women who are 50-70 years old are invited for breast cancer screening every three years.

Women over 70 are also entitled to screening and can arrange an appointment through their doctor or local screening unit.

The NHS is in the process of extending the programme as a trial, offering screening to some women aged 47-73. Read More About: Breast Screening.

If cancer is detected at an early stage, it can be treated before it spreads to nearby parts of the body.

The type of surgery and the treatment you have afterwards will depend on the type of breast cancer you have. Your doctor will discuss the best treatment plan with you.

In a small proportion of women, breast cancer is discovered after it’s spread to other parts of the body (metastasis). Secondary cancer, also called advanced or metastatic cancer, isn’t curable, so the aim of treatment is to achieve remission (symptom relief). Read More About: Treating Breast Cancer

As the causes of breast cancer aren’t fully understood, it’s not possible to know if it can be prevented altogether.

If you’re at increased risk of developing the condition, some treatments are available to reduce the risk.

Studies have looked at the link between breast cancer and diet and, although there are no definite conclusions, there are benefits for women who maintain a healthy weight, exercise regularly and who have a low intake of saturated fat and alcohol.

It’s been suggested that regular exercise can reduce your risk of breast cancer by as much as a third. If you’ve been through the menopause, it’s particularly important that you’re not overweight or obese. This is because being overweight or obese causes more oestrogen to be produced, which can increase the risk of breast cancer. Read More About: Preventing Breast Cancer

Being diagnosed with breast cancer can affect daily life in many ways, depending on what stage it’s at and what treatment you’re having.

How women cope with their diagnosis and treatment varies from person to person. You can be reassured that there are several forms of support available, if you need it. For example: