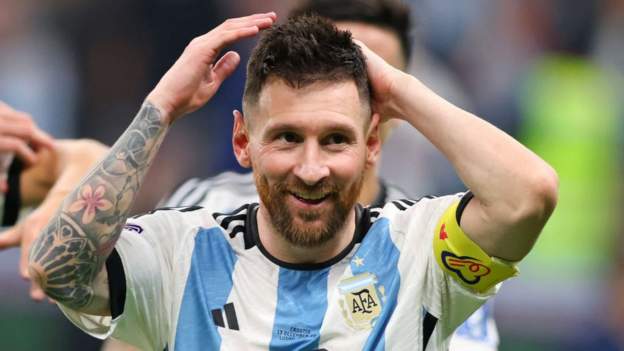 Lionel Messi’s last dance will continue until the music stops in Qatar on Sunday as he now stands just 90 minutes away from the ultimate accolade of having a World Cup forever attached to his name.

Just like Diego Maradona stamped himself indelibly on Argentina’s 1986 win in Mexico and Brazil striker Ronaldo wrote a redemption story in Yokohama in their 2002 triumph, this will be known as Messi’s World Cup if he inspires victory against either France or Morocco in the final.

Argentina’s campaign in Qatar opened with the ignominy of what is still this World Cup’s biggest shock, when they lost to Saudi Arabia.

But the manner in which the master Messi and his apprentice Julian Alvarez swept aside Croatia in their 3-0 semi-final win delivered an ominous warning that they are reaching the sort of perfect crescendo their fans were still hitting in Lusail Stadium long after the final whistle.

So it is all back to the space-age Lusail on Sunday to see if Argentina can win a third World Cup in their sixth final, and whether the player some label the greatest the game has ever seen can finally get his hands on the prize that has remained tantalisingly out of his reach.

It seemed, for a while at least, that the perfect ending the romantics and those who support Argentina crave would be transformed into a nightmare as a grimacing Messi bent over in the 19th minute, stretching and feeling the top of his left hamstring.

Messi, who equalled Lothar Matthaus’ World Cup record of 25 matches played, moved at walking pace, which the 35-year-old does quite a lot in his current mode of operation, clearly feeling discomfort.

But he received the biggest tonic of all after 34 minutes when he lashed the opener past Dominik Livakovic from the penalty spot after Croatia’s keeper had fouled Alvarez.

Alvarez then took Messi’s header just inside the Croatia half five minutes later before embarking a long and winding road to goal, aided by rebounds off Josip Juranovic and Borna Sosa, before beating Livakovic.

The high point of this duo’s masterclass came after 69 minutes when Messi, the magician from Rosario, more or less made one of the tournament’s outstanding defenders disappear.

Messi looked to be trapped by the touchline but a twist and sleight of foot took him away from Josko Gvardiol, now regarded as an ‘A-List’ defender and touted for a £70m move away from RB Leipzig, to set up the predatory Alvarez.

In that moment, Messi did not just mesmerise Gvardiol once, but on a couple more occasions for good measure.

It was pitched as Messi for Argentina against Luka Modric for Croatia, two magnificent players who have World Cup history stretching back to Germany in 2006.

It was not to be Modric’s night. He will not have the chance to make amends for defeat by France in the 2018 final in Moscow, but received warm applause from all around the stadium when he was substituted with nine minutes left.

At the final whistle, Argentina coach Lionel Scaloni slumped tearfully into Messi’s arms in a gesture of thanks for the performance that has taken them both to the brink of the crowning glory of their careers.

The Messi story goes on to Sunday, when he will have the opportunity to finally erase the memories of his very obvious distress and disappointment when he failed to stop Argentina losing 1-0 to Germany in Rio’s iconic Maracana in 2014.

And as an indicator of his longevity and enduring talent, his contribution against Croatia meant he has become the first player to score and assist in four separate World Cup matches since 1966 – against Serbia in 2006 and Mexico, the Netherlands and Croatia here in Qatar.

Argentina have scored 12 goals at this World Cup. Messi has netted five and assisted three – he was not given another assist for the header which set Alvarez on his way to goal to double Argentina’s lead.

He has 11 goals at World Cups in total, which is the Argentina record.

And Messi is now level with Kylian Mbappe in the race for the Golden Boot at Qatar with five goals. Could that contest also be settled on the biggest global sporting stage of all on Sunday?

BBC Sport pundit and former England captain Alan Shearer suggests Argentina lifting the World Cup on Sunday could have a wider significance when it comes to the argument of who is the greatest footballing product from that country – Messi or Maradona?

Shearer said: “What a story it would be if Argentina win the World Cup. Would it put an end to the debate of Messi or Maradona?

For club and country, Messi has won it all and done it all – except for winning the World Cup.

Could that moment of destiny arrive at Lusail Stadium on Sunday? If it does this will always be known as Lionel Messi’s World Cup.