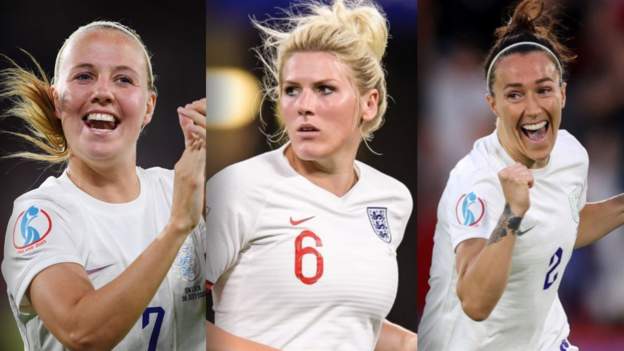 England Euro 2022 winners Millie Bright, Beth Mead and Lucy Bronze have been nominated for the women’s Ballon d’Or, awarded to the best female footballer of 2022.

Lionel Messi, the seven-time men’s winner, misses out as 15 Premier League players – including 12 from Liverpool and Manchester City – are nominated.

Mead was named Euro 2022’s best player after winning the Golden Boot award given to the tournament’s top scorer.

Organisers will announce the winners on 17 October.

The Lionesses defeated Germany 2-1 after extra time in the final of Euro 2022 at Wembley to secure a first major trophy for a senior England team since the men won the 1966 World Cup.

Barcelona and Spain midfielder Alexia Putellas, the 2021 Ballon d’Or winner, is nominated too, as is Chelsea’s Sam Kerr, who scored 20 goals in the Women’s Super League in 2021-22.

No Messi after underwhelming season

There are 30 players in total nominated for the men’s prize – with half of the names on that list playing in this season’s Premier League.

Real Madrid’s Karim Benzema, one of the strong favourites, is listed but Messi does not make it after an underwhelming first season at Paris St-Germain.

England players Jude Bellingham and Bukayo Saka are among 10 players nominated for the Kopa Trophy, presented to the best performing player under the age of 21.