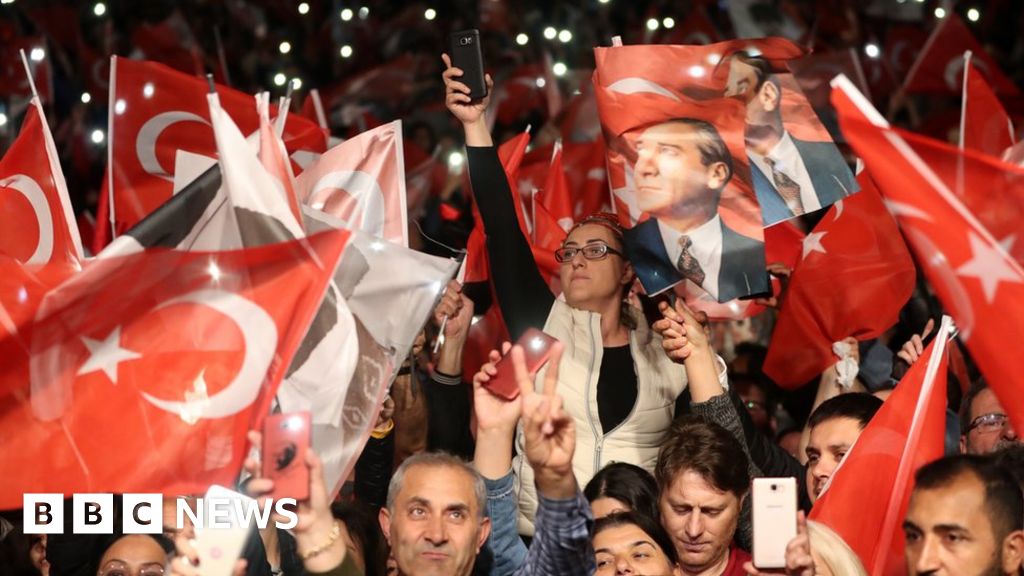 Turkey’s electoral body has ordered that Istanbul’s local elections be re-held after a shock opposition victory in March.

President Recep Tayyip Erdogan’s AK Party questioned the slim win by the opposition CHP, claiming there were “irregularities and corruption”.

CHP deputy chair Onursal Adiguzel said the rerun showed it was “illegal to win against the AK Party”.

The vote in Turkey’s largest city will be held on 23 June.

An AKP representative on the electoral board, Recep Ozel, said the rerun was because some electoral officials were not civil servants and some result papers had not been signed.

Mr Adiguzel tweeted that the decision was “plain dictatorship”.

“This system that overrules the will of the people and disregards the law is neither democratic, nor legitimate,” he wrote.

In a speech broadcast on social media, the mayor condemned the electoral board for ordering a rerun, saying they were influenced by the ruling party.

“We will never compromise on our principles,” he told the crowd. “This country is filled with 82 million patriots who will fight… until the last moment for democracy.”

A supporters’ group for Mr Imamoglu urged restraint, saying: “Let’s stand together, let’s be calm… We will win, we will win again.”

Municipal elections took place across Turkey on 31 March and were seen as a referendum on Mr Erdogan’s leadership amid a sharp economic downturn.

Although an AKP Party-led alliance won 51% of the vote nationwide, the secularist CHP claimed victory in the capital Ankara, Izmir, and in Istanbul – where Mr Erdogan had once been mayor.

The ruling party has since challenged the results in Ankara and Istanbul , which has prompted opposition accusations that they are trying to steal the election.

President Erdogan was never going to take the loss of Istanbul lying down. “Whoever wins Istanbul wins Turkey”, he has often said. He is determined to win back the country’s economic powerhouse.

But it’s a strategy fraught with risk. The Turkish lira – which has lost more than 30% over the past year – has slumped again. An economy in recession can hardly cope with more uncertainty. After all, it was economic woes that lost Istanbul for Mr Erdogan in the first place.

What’s more, Ekrem Imamoglu, who was formally appointed mayor last month, is gaining popularity, fast. He’s reached out beyond his base and has settled into the role with ease. The rerun could widen his win – barring major irregularities against him, which many of his supporters fear.

And Mr Erdogan’s own party is deeply split on the issue. His diehard loyalists believe victory was stolen. But other wings of the party accept they lost, and that rejecting the result is another nail in the coffin for what’s left of Turkish democracy.