Trump to send ‘surge’ of hundred of federal agents to cities 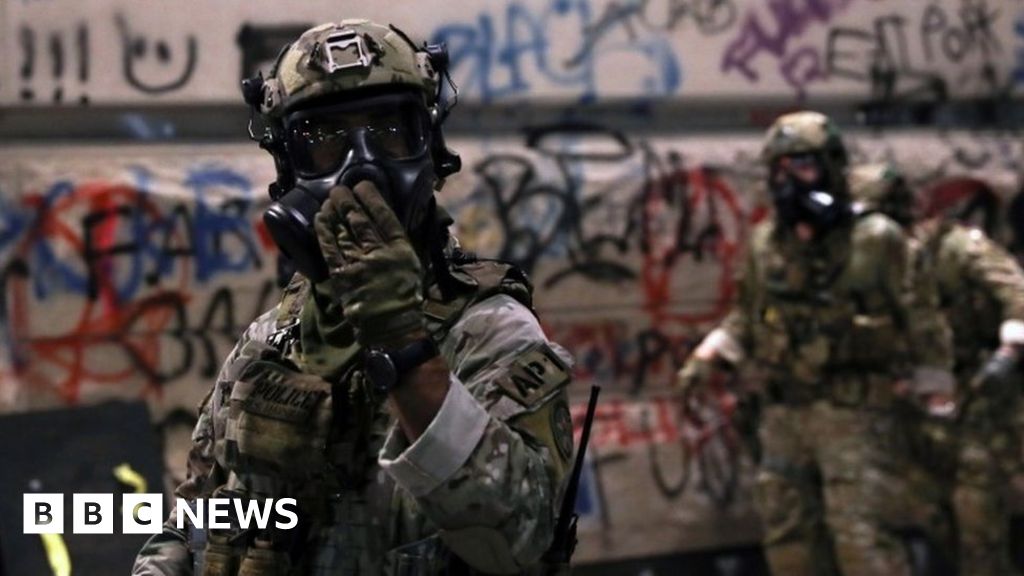 US President Donald Trump is sending hundreds of federal law enforcement officers to cities he says are plagued by a “shocking explosion” of crime.

The Republican said Operation Legend would see a “surge” of agents deployed to Democratic-run Chicago, Albuquerque and Kansas City.

Federal officers are already in Portland, Oregon, where the mayor says they are making ongoing protests worse.

Mr Trump is adopting a law-and-order posture ahead of November’s election.

US Attorney General William Barr, who joined Mr Trump at Wednesday’s announcement, said they had sent about 200 federal agents to Kansas City, Missouri, would send a “comparable” number to Chicago, and about 35 others to Albuquerque, New Mexico.

There have been protests – sometimes descending into civil disorder – in scores of US cities since May, following the death of an unarmed black man, George Floyd, in police custody in Minneapolis, Minnesota.

The officers quickly used crowd-control munitions in an attempt to disperse hundreds of people gathered outside a federal court.

The agents have been accused of driving in unmarked vehicles around Oregon’s biggest city while wearing military fatigues and arbitrarily arresting a handful of demonstrators.

Chicago Mayor Lori Lightfoot confirmed on Tuesday that federal agents would be deployed to her city to beef up local police.

“We welcome actual partnership, but we do not welcome dictatorship,” Ms Lightfoot told a news conference, warning that the federal officers should not try the same tactics they have used in Portland.

Mr Trump often highlights Chicago’s gun violence epidemic and he did so again on Wednesday.

“This rampage of violence shocks the conscience of our nation,” he said.

In the latest incident in Chicago, at least 15 people were shot outside a funeral home in a suspected gang-related attack.

Federal officers were deployed to Kansas City following the death of a four-year-old boy, LeGend Taliferro, who was shot in the face while sleeping in his family home in June.

The federal law enforcement operation is named after the boy, Mr Trump said. LeGend’s mother joined the president at the announcement.

“No mother should ever have to cradle her dead child in her arms simply because politicians refused to do what is necessary to secure their neighbourhood and to secure their city,” Mr Trump said.

Traditionally crime-fighting programmes are popular during election campaigns, and critics of the president say this initiative is directed more at his conservative supporters in the rural heartland than those who live in Kansas City and other urban areas.

Mr Trump’s critics say the initiative is not really an effort to fight urban crime, claiming it is simply a way to drum up enthusiasm among the president’s base of supporters before the election.