If you have appendicitis, your appendix usually needs to be removed as soon as possible. This operation is known as an appendectomy or appendicectomy.

Surgery is usually also recommended if there’s a chance you have appendicitis but it’s not been possible to make a clear diagnosis. 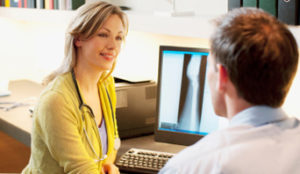 In humans, the appendix doesn’t perform any important function and having it removed doesn’t cause any long-term problems.

Appendectomies are carried out under general anaesthetic using either a keyhole or open technique.

Keyhole surgery (laparoscopy) is usually the preferred method of removing the appendix because the recovery tends to be quicker than with open surgery.

This operation involves making three or four small cuts (incisions) in your tummy (abdomen). Special instruments are then inserted, including:

Once the appendix has been removed, the incisions will usually be closed with dissolvable stitches. Regular stitches may also be used, which need to be removed at your GP surgery 7 to 10 days later.

In some circumstances, keyhole surgery isn’t recommended and open surgery is performed instead. These include:

In these cases, the operation involves making a single larger cut in the lower right-hand side of your abdomen to remove the appendix.

When there’s widespread peritonitis – infection of the inner lining of the abdomen – it’s sometimes necessary to operate through a long cut along the middle of the abdomen in a procedure called a laparotomy.

As with keyhole surgery, the incision is closed using either dissolvable stitches or regular stitches that need to be removed at a later date.

After both types of surgery, the removed appendix is routinely sent to a laboratory to check there are no signs of cancer. This is a precautionary measure, although it’s rare for a serious problem to be found.

One of the main advantages of keyhole surgery is the recovery time tends to be short and most people can leave hospital a few days after the operation.

If the appendix is operated upon promptly, most patients can go home within 24 hours. With open or complicated surgery – for example, if you have peritonitis – it may take up to a week before you’re well enough to go home.

For the first few days after the operation you’re likely to experience some pain and bruising. This improves over time, but you can take painkillers if necessary.

If you had keyhole surgery, you may experience pain in the tip of your shoulder for about a week. This is caused by the gas that was pumped into the abdomen during the operation.

You may also experience some short-term constipation. You can help reduce this by not taking codeine painkillers, eating plenty of fibre, and staying well hydrated. Your GP can prescribe medication if the problem is particularly troublesome.

Before leaving hospital, you’ll be advised about caring for your wound and what activities you should avoid.

In most cases, you can return to normal activities in a couple of weeks, although more strenuous activities may need to be avoided for four to six weeks after open surgery.

When to Seek Medical Advice

While you recover, it’s important to keep an eye out for signs of any problems.

Contact the hospital unit where the appendectomy was performed or your GP for advice if you notice:

Appendectomies are one of the most commonly performed operations in the UK, and serious or long-term complications are rare.

However, like all types of surgery, there are some risks. These include:

The use of general anaesthetic also carries some risks, such as the risk of an allergic reaction or inhaling stomach contents, leading to pneumonia. However, serious complications like this are very rare.

In some cases, appendicitis can lead to the development of a lump on the appendix called an appendix mass.

This lump, consisting of appendix and fatty tissue, is an attempt by the body to deal with the problem and heal itself.

If an appendix mass is found during an examination, your doctors may decide it’s not necessary to operate immediately.

Instead, you’ll be given a course of antibiotics and an appointment will be made for an appendectomy a few weeks later, when the mass has settled.

Another possible alternative to immediate surgery is the use of antibiotics to treat appendicitis.

However, studies have looked into whether antibiotics could be an alternative to surgery and as yet there isn’t enough clear evidence to suggest this is the case.