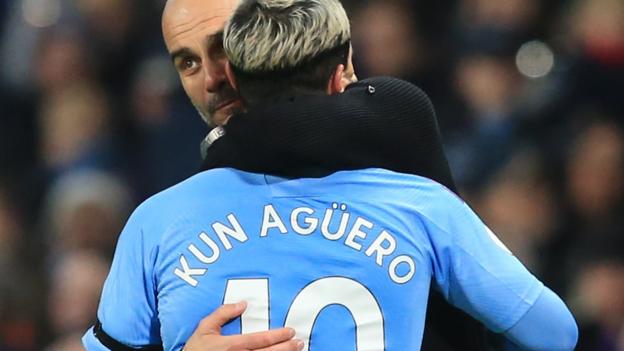 “He’s a legend,” added Guardiola. “It was an honour to be here on the day he achieved the record.”

Aguero scored City’s third, fifth and sixth goals – as well assisting Riyad Mahrez for the opener – as Guardiola’s side demolished Villa to move above Leicester into second in the table.

Aguero’s contract ends in 2021 but Guardiola has not given up hope that the striker, who joined from Atletico Madrid in July 2011 for £40m, will sign a new deal.

“It depends on him, it is his decision,” said Guardiola.

“This kind of player… there are not many in the incredible history of English football. He helps to make the Premier League better.”

Guardiola described Aguero as the second best striker in the world behind his fellow Argentina forward Lionel Messi, who the Spaniard managed at Barcelona.

He added: “The best is Messi.

If you are viewing this page on the BBC News app please click here to vote.

What the stats say

Only three men – Alan Shearer, Wayne Rooney and Andy Cole – who played virtually all of their careers in England, remain in front of Aguero on the all-time Premier League goalscoring list.

His treble against Villa was Aguero’s 12th hat-trick, which is a Premier League record.

Predominantly right-footed, 33 of Aguero’s 177 Premier League goals have come from his left foot while 17 have been headers. Only 26 have come from the penalty spot.

“To break this record of an incredible legend like Thierry Henry means it’s not just for a short period, it’s many years,” added Guardiola.

“To be the foreign player with the most goals and hat-tricks speaks for itself. Hopefully he can score more.”

Aaron: City really need to treasure Aguero while they can. He won’t stay much longer and they won’t find another striker as naturally lethal anytime soon – despite their riches.

Liz Tray: Aguero is irreplaceable. We’ll need to buy two strikers at least to replace Aguero. I shall shed a tear when he leaves.

Philip West: For me, Aguero is the best striker the Premier League has ever seen. Deadly, prolific, and consistent every single season. When he finally heads back to Argentina, this league, and English football as a whole, loses a true great.

Jason Moore: It’s scary to think how many Aguero would have scored if he’d have cut out the injuries that seemed to happen at least a couple of times a season – 30/40 league goals a season?

Joe Gibney: Sergio Aguero won’t just kill the opposition, he’ll attend the funeral too and check the coffin to make sure he’s finished them. Ruthless.

Aleksander Pagels: Aguero said he’ll leave Man City in summer 2021. That gives him one-and-a-half- seasons to pass Wayne Rooney in second place with most Premier League goals. He’ll do it, and he’ll leave the country with only one man having scored more goals in the Premier League.