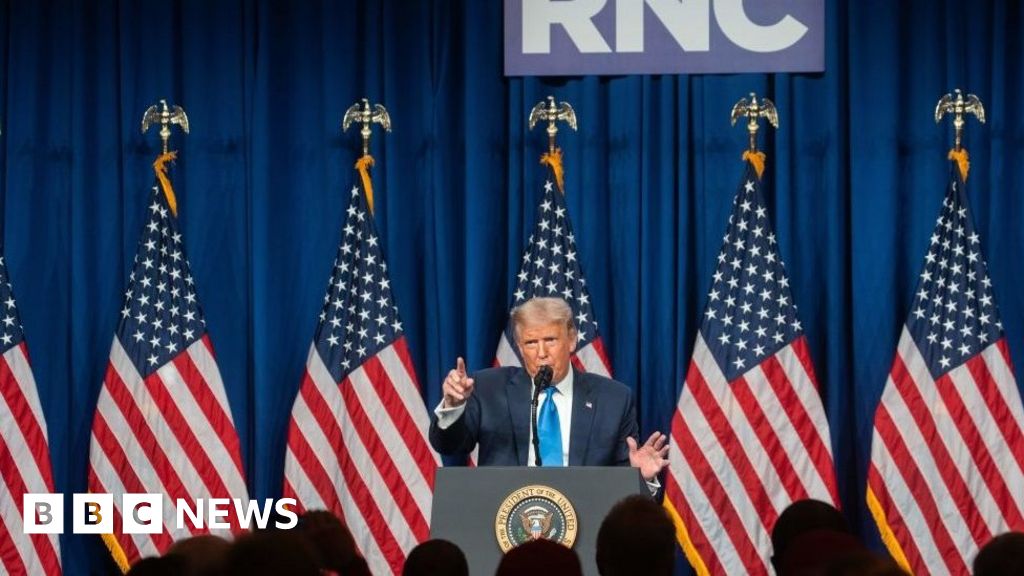 US President Donald Trump has warned his fellow Republicans their opponents may “steal” November’s election, as his party anointed him as their candidate.

“They’re using Covid to defraud the American people,” Mr Trump told delegates on the first day of the party convention in North Carolina.

Addressing delegates in person at a party conference that has been dramatically scaled down by Covid-19, Mr Trump accused Democrats of “using Covid to steal an election”.

“The only way they can take this election away from us is if this is a rigged election,” he said. “We’re going to win.”

Mr Trump also warned of a “rigged” election in 2016 , as he trailed Hillary Clinton in the polls.

As a formality, Mr Trump was officially nominated to be the Republican nominee on Monday at his party’s convention in the city of Charlotte.

The president is due to give a speech to the party convention on Thursday. It is unusual for a candidate to address the convention before their formal acceptance speech.

Supporters at the convention cheered Mr Trump’s remarks, and as they began to chant “four more years” Mr Trump interjected.

“Now if you really want to drive them crazy, you say 12 more years,” he said. The 22nd Amendment to the US Constitution, ratified in 1951, says US presidents are only permitted to serve two terms, for a total of eight years in office.

Mr Trump has repeatedly asserted that expanded mail-in voting – which is expected to be more prevalent this year due to the ongoing pandemic – will lead to “the most corrupt election” in US history.

But there is no evidence of widespread fraud, and in fact only very few examples of Americans being prosecuted for the crime.

Ellen Weintraub, commissioner of the Federal Election Commission, has said: “There’s simply no basis for the conspiracy theory that voting by mail causes fraud. None.”

Mail-in voting has been around since the US Civil War, and is used by the US military, Mr Trump himself and members of his family.

But a recent slowdown in mail deliveries due to cost-saving measures in the US postal system has led to concerns that ballots will not be returned to state officials by election day.

Several states have sought to change their election laws to allow ballots to be counted days after the forthcoming presidential vote, which some analysts fear could lead to delays in determining the presidential winner.

A primary election in New York City this June took weeks to determine a winner after poll officials were deluged with 10 times the normal number of mail-in ballots. There was no allegation of fraud, but the debacle raised fears of a lengthy recount this November.

Earlier this month, New Jersey officials ordered a new election after finding evidence of voter fraud in an all-mail-in election that saw four people arrested, including a local city councilman and councilman-elect. The case has been frequently touted by the Trump campaign.

What else is happening on the convention’s opening night?

Republicans said Monday night’s theme was “Land of Promise” and pledged their convention would be less “negative” than the Democrats’ conference last week.

US Secretary of State Mike Pompeo’s plan to address the convention on Tuesday from Israel, where he is on an official trip, has led to sharp criticism about the nation’s top diplomat overtly campaigning in a political race while conducting US government business abroad.

State department officials told US media that no taxpayer funding went towards the video, which was filmed while Mr Pompeo was visiting the top US ally.

Mr Trump has also been accused of misusing government resources by making his convention speech from the White House.