Mohamed Salah came off the bench to score an incredible six-minute hat-trick as Liverpool obliterated Rangers in the Champions League.

The striker netted three times in his sensational first 13 minutes on the pitch to silence a once-euphoric Ibrox crowd.

Scott Arfield had given Rangers an early lead with their first group goal, but a Roberto Firmino double and a Darwin Nunez strike set Liverpool on their way, with Harvey Elliott getting a seventh after a VAR check.

It was a mesmeric second-half performance from the Premier League club, who now just need a draw against Ajax in Amsterdam in two weeks to advance to the next stage.

A beleaguered Rangers are still searching for their first points, and their hopes turn to trying to finish third in Group A and claim a Europa League place. It does not get any easier for them, though, as they travel to face group leaders Napoli next.

As Salah trotted on to the Ibrox pitch, it was with little fanfare. Nunez had just given the visitors a commanding 3-1 lead, and the Egyptian’s introduction seemed almost like the cherry on the cake after a tasty game had been yanked away from Rangers.

But a player whose stellar form has dipped to merely good this term produced something special.

It started with an old-fashioned toe poke from a tight angle. Salah was off and running. A handful of minutes later, a drop of the shoulder, a quick change of pace on the edge of the box, and a deceptive finish brought his second. Ibrox, not for the first or last time in the half, fell silent.

There was barely time to type his name as the player of the match before his astonishing intervention was complete with yet another composed finish. 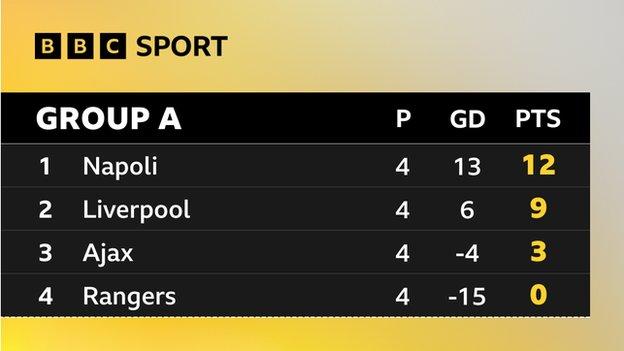 After just 17 minutes of this frenzied contest, it looked all so different. All of Liverpool’s wins since August have come in Europe, but another looked unlikely amid a cacophony of noise in Govan.

A flowing Rangers move cleaved open a static Liverpool defence and allowed Arfield space to steer a shot low across Alisson and into the net. Finally Rangers had arrived in this year’s Champions League.

It was an arrival which was celebrated for seven minutes. Kostas Tsimikas’ whipped corner to the near post found an unmarked and grateful Firmino, who nodded in from six yards.

Ten minutes after the break, Firmino hushed a raucous crowd again. Joe Gomez’s rampaging run down the right created the opening, and his inch-perfect delivery found the Brazilian on the run for a low first-time steer through Allan McGregor’s legs.

The writing was on the wall for Rangers by this point, and it was absolutely game over on 66 minutes. Again Firmino was involved, his cute flick teeing up Nunez for a curling shot around McGregor from the edge of the box for a goal met with a ferocious punch of the air by manager Jurgen Klopp.

After Salah was finished stealing the show, there was still time for more as Elliott got in on the act. The youngster was originally flagged for offside after volleying in, before a VAR check reversed the decision and sent him jogging away in celebration to a jubilant band of supporters in the far corner.

Player of the match – Mohamed Salah

This was a result Liverpool needed, but the scoreline will send a warning that they are still capable of being imperious.

Apart from Firmino’s opener, they did not look clinical in front of goal in the first half. They were also playing themselves into trouble at the other end.

But the Brazilian played a starring role in turning the tide. His link-up play was a joy to watch, while his finishing and influence was key as Liverpool ran riot after the break. Then enter Salah…

Rangers, meanwhile, now sit bottom of Group A with a goal difference of minus 15 and zero points. The heat of Seville and the Europa League final has long since faded as a winter of discontent on the continent brews.

There is still time for Giovanni van Bronckhorst’s team to secure some sort of European football after Christmas, but there won’t be too many inside Ibrox for this one who will have much hope of them doing so.

Liverpool go to Amsterdam on Wednesday, 26 October (20:00 BST) needing a draw against Ajax to progress. Rangers travel to Italy to take on Napoli at the same time.