I was at Etihad Stadium on Saturday when Raheem Sterling blasted a good chance over against Watford. You should have heard how many fans around me were groaning and shouting ‘useless’ or ‘get him off’.

Manchester City were 3-1 up at the time and Sterling was playing really well. That was the first shot he’d had in the game and, although I didn’t say anything to the people near me, I was just thinking they really needed to calm down.

It’s nothing new, either. Sterling seems to get that extreme reaction more than any other City player. It doesn’t matter how many goals he scores or the good things he does in a game – if he misses, well, it’s typical Sterling, isn’t it?

Of course I understand why he frustrates fans when he scores the hard goals but misses the easy chances. I feel that way when I watch Riyad Mahrez, even though he is City’s top scorer in all competitions this season with 23 goals.

But I don’t find Mahrez frustrating because I feel he lacks quality, I just think he’s got even more to offer.

He will do something ridiculous like bring the ball down with an immaculate first touch, go past three players… and then waste it all by trying to do too much in front of goal, and the opportunity is gone.

If Mahrez did the simple things in those areas, he would have Mohamed Salah’s stats and be scoring 40 goals a season.

With Sterling, it’s different. It’s almost as if a lot of the fans feel he’s actually not good enough for City and it’s always going to be that way.

They are wrong, but maybe he’ll never be properly appreciated no matter how many goals he scores or makes – or how many trophies he helps City win.

His numbers are amazing by the way. Since he joined in 2015 he has hit 112 goals in 286 games in the Premier League and Champions League alone, and made 55 assists. That’s brilliant for someone who is used as a wide forward most of the time.

In terms of his role in this City side, though, there’s even more to him than that. He is a player who can affect the game just by being on the pitch, because of his pace and the runs that he makes.

His movement is incredible at all times and he is so clever with the way he runs in behind, stretches defences and leaves gaps for others to exploit. Defenders can’t rest if he is playing.

City would miss him badly if he left, and I just wish the people who criticise him so much would see the bigger picture and what he brings to the team, rather than just talk about the chances he has missed.

How Sterling always bounces back

Like Gabriel Jesus, Sterling is out of contract in 2023 and, until either of them sign an extension, they are going to be linked with other clubs.

Arsenal are supposedly in for Jesus and I read stories last week about Sterling going to AC Milan, but for me it’s simple – City have to try to keep them both if they can.

Both of them are versatile and hard-working, and can play on both wings or down the middle. They also don’t just know how to play in Pep Guardiola’s system, they excel at it.

Game-time might be an issue in persuading Jesus to stay but I don’t think it’s the case that Sterling has slipped down the pecking order in recent months.

He has been in and out of the team but lots of players have found themselves out of favour for a spell under Pep. With Sterling, it also happened at the end of last season, when his goals dried up.

Sterling has these moments where his form is up and down but he always comes back strongly. He was basically written off before last summer’s European Championship but ended up being one of the stars of the tournament.

He’s still only 27. Sure, there will be times when he should score more, but I would argue the same could be said for a few other City players given the number of chances the team creates.

Sterling cost City £49m when he joined from Liverpool in 2015. Can you imagine how much it would cost to bring in a player who would deliver what he does – if you can find one?

Who will face Real Madrid?

One of Pep’s problems is that he always has to leave some of his forwards out. Real Madrid are next up at Etihad Stadium, in the first leg of their Champions League semi-final on Tuesday, and he has some hard decisions to make.

The last time City played Real at Etihad was when the delayed 2019-20 season was being completed.

For the second leg at the Etihad, Guardiola went with a front three of Jesus, Foden and Sterling and their energy, pace and relentless pressing unsettled Real as City won 2-1. 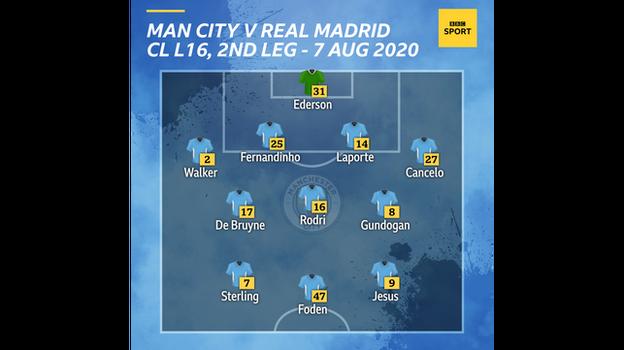 Six months earlier, in the first leg at the Bernabeu, Guardiola went with a completely different formation.

Sterling only came on for the last 17 minutes but scared Real stiff with his runs at their defence and won a penalty which Kevin de Bruyne converted to give City an impressive late win by the same scoreline. 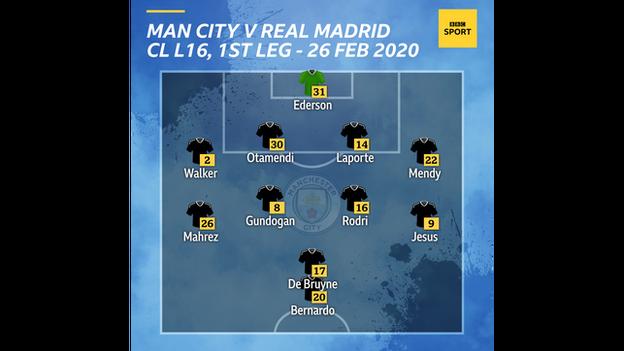 This time, well, if City were at full-strength at the back I actually think Guardiola would leave Sterling out of his starting XI again, go with a front three of Foden, Jesus and Mahrez, and just look to use him in a similar way from the bench when the game starts to open up.

But with one first-choice full-back, Joao Cancelo, suspended and another, Kyle Walker, an injury doubt, City could have a weakness defensively down each side.

I’d love to get Mahrez in the team because even when he is not having a good game he seems to make a difference with a goal or an assist, but he might have to step aside because Jesus has to play on the right.

That’s not because of the four goals he scored against Watford at the weekend, but because City will need his work-rate to deal with Vinicius Jr’s threat down that flank. Guardiola started him home and away against Liverpool in the league for the same reason.

Foden simply has to play on the left, because he provides such a spark – like he did when he set up De Bruyne for the winner against Atletico Madrid in the first leg in the last round – so Sterling might get the nod as the false nine.

At the moment he’s going through one of his mini droughts – he hasn’t found the net in his past six matches for City, since he scored against Southampton in the FA Cup on 20 March, but we know Pep still trusts him because he keeps picking him.

I wouldn’t be surprised if he plays against Real – and whether he scores or not, for me it would be typical Sterling if he plays a big part in helping City win.