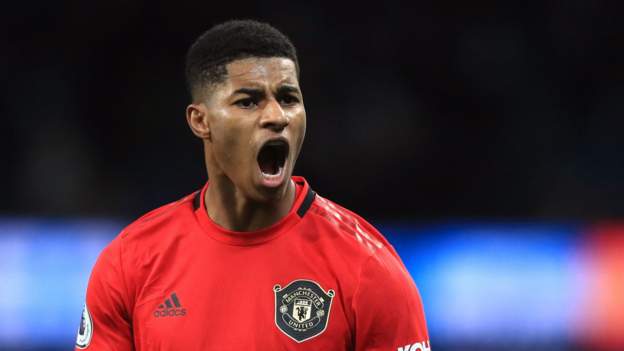 Last updated on 1 hour ago1 hour ago.From the section Sport

The footballer, 22, campaigned for the government to allow about 1.3 million children to claim free school meal vouchers in England’s summer holidays during the coronavirus pandemic.

Rashford, who has asked Prime Minister Boris Johnson to extend that scheme, said the MBE was a “nice moment”.

A Commonwealth Games 10,000m champion, Foster competed at three Olympics for Great Britain before beginning a commentary career in 1980.

He founded the Great North Run – the UK’s biggest running event in terms of participation – the following year, and went on to cover nine summer Olympic Games for the BBC, retiring from commentary in 2017.

In rugby union, former Wales head coach Warren Gatland and Gareth Thomas – who played for the country in both union and league – have become CBEs, while Alun Wyn Jones, the team’s current captain, has been appointed an OBE.

The Queen’s Birthday Honours list was originally scheduled to be published in June, but it was postponed by the prime minister to allow nominations of people who played crucial roles during the first months of the coronavirus pandemic.

After a coronavirus lockdown was imposed in the UK in March, the government provided vouchers to families whose children qualify for free meals, but it had insisted this would not continue into the summer holidays.

This prompted Rashford to write an open letter to MPs, drawing on his own experiences of relying on free school meals and food banks while growing up in Wythenshawe, Manchester. He called on the government to reverse its decision – which it did shortly after he spoke out.

That enabled about 1.3m children in England to claim vouchers over the holidays, with the support working out at about £15 a week for each child.

Rashford continued his campaign by establishing a taskforce with some of the UK’s biggest food brands to try to help reduce child food poverty.

He wants politicians to go further to tackle hunger in families.

Speaking to BBC Breakfast about being made an MBE, Rashford said: “It’s a nice moment for me personally but I feel like I’m still at the beginning of the journey that I set out to try to achieve.

“I think what I would like to do now that I’m in this position is just speak directly to the prime minister and really ask for the vouchers to be extended until at least October half-term because I think that’s what the families need.

“Speaking to them and knowing how much they’ve been helped, and how much it’s going to affect them if they don’t have it, that’s got to be my main focus now – to get that message across.”

Members of the Order of the British Empire (MBE)

Marcus Rashford (footballer, England and Manchester United), for services to vulnerable children in the UK during Covid-19

Brendan Foster, for services to international and national sport and culture in north east England

Commander of the Most Excellent Order of the British Empire (CBE)

Officers of the Order of the British Empire (OBE)

Members of the Order of the British Empire (MBE)

Ian Beattie (chairman of Scottish Athletics), for services to athletics

Sue Day, for services to gender equality in sport

Jim Neilly, for services to sports broadcasting and charity in Northern Ireland