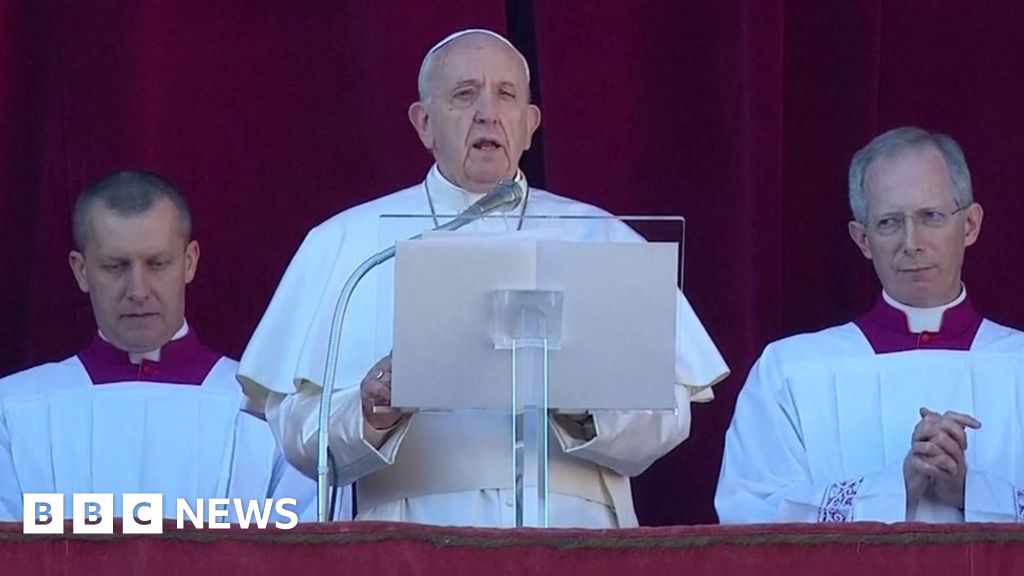 The Pope has prayed for a softening of “stony and self-centred hearts” to help end injustice in the world, in his Christmas Day message.

From the Vatican balcony, Pope Francis spoke of “walls of indifference” being put up to people fleeing hardship in the hope of finding a better life.

The Pope prayed for those hit by conflict, natural disasters and disease, listing several countries.

He singled out parts of Africa where Christians had been killed.

Speaking under a clear blue sky to thousands crowded into St Peter’s Square, the Pope urged “comfort to those who are persecuted for their religious faith, especially missionaries and members of the faithful who have been kidnapped, and to the victims of attacks by extremist groups, particularly in Burkina Faso, Mali, Niger and Nigeria”.

An attack on Christmas Eve in Burkina Faso left 35 people dead , most of them women.

Hundreds of people have been killed in the country over the past few years, mostly by jihadist groups.

Hours earlier, in a rare joint message with two other Western Church leaders, the Pope appealed for peace in South Sudan.

In their statement, the pontiff, the head of the Anglican Church and the former moderator of the Church of Scotland called for “a renewed commitment to the path of reconciliation and fraternity”.

South Sudan declared independence from Sudan in 2011 but has been crippled by conflict ever since.

In what was his seventh “Urbi et Orbi” (“To the City and the World”) Christmas Day address, the Pope also highlighted other hotspots of unrest including Syria, Lebanon, Yemen, Iraq, Venezuela, Ukraine and the Holy Land.

For change to happen for the better, he said, people had to be more compassionate.

“May [God] soften our often stony and self-centred hearts, and make them channels of His love. May He bring His smile, through our poor faces, to all the children of the world: to those who are abandoned and those who suffer violence,” he said.