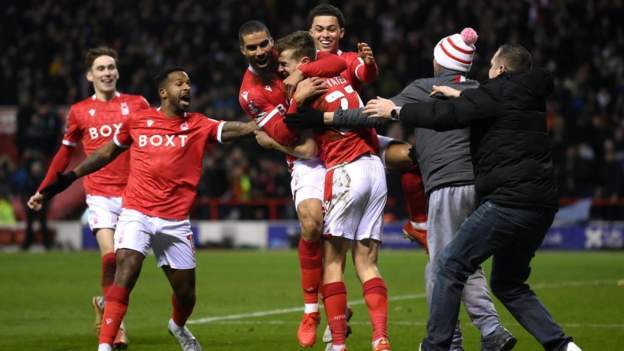 Arsenal manager Mikel Arteta apologised for his side’s display after they were knocked out of the FA Cup in the third round by Nottingham Forest for the second time in four years.

The Gunners appeared to have turned a corner of late but were lacklustre against their Championship opponents.

“We were not good enough and we have to apologise for it,” Arteta said.

“We needed more drive, more hunger to win at any cost in every single action, much more. We were not at our level.

“I’m really disappointed with the performance, first of all. Not with the attitude but how much purpose we have and what determination we showed to change the game when it’s difficult to play against the way they play.

“I have played in games like that for the past 18 years and I know how complicated it is to come here. It’s no surprise the difficulties you are going to face. But when we do that, we have to face it in a different way.

“It is really hurting. It is a competition that is very related to our history and to get out of it is a big bump.”

Forest, resurgent under manager Steve Cooper, can now look forward to an East Midlands derby and another meeting with a Premier League side, holders Leicester City, in the fourth round.

The Championship side, who beat the Gunners 4-2 at the same stage in 2018 and have not lost a home tie in six years, were physical from the start.

Cooper was delighted with his side’s battling display, the latest in a series of impressive performances since he took charge in September.

“I think we deserved to win,” he said. “We came up against a really good team. We had a clear game plan. We wanted to be brave with our pressing and get at them on the counter and that’s how we scored.

“I’m really proud of the boys, pleased with the performance. It’s brilliant to get through and I hope the players now really believe in what we’re doing.”

Debutant Kienan Davis, leading the line after completing a loan move from Aston Villa, caused problems for the visiting defence during a first half in which Arsenal failed to assert themselves.

Arteta’s frustration was illustrated when he substituted left-back Nuno Tavares – whose performance was summed up by a wild back pass that visiting keeper Bernd Leno had to chest away from goal – for Kieran Tierney after 34 minutes.

The Portuguese defender threw his gloves away as he left the field and did not acknowledge his manager on the sidelines.

After the break, Leno denied Philip Zinckernegal when he connected sweetly with Johnson’s inviting cross then kept out Joe Garner’s powerful free kick.

But with eight minutes left, substitute Grabban met Yates’ cross to condemn Arsenal to another third-round exit in the East Midlands.

There were nearly 25,000 packed into the City Ground and the crowd clearly inspired Cooper’s men, who won battles all over the pitch.

Djed Spence, on loan from Middlesbrough, was particularly impressive at right-back, nullifying Martinelli.

Arsenal had been warned of the threat Forest posed from crosses early in the second half, but they didn’t learn and paid the price on a miserable night for Arteta’s men.

Arsenal, who were wearing an all-white kit in support of the ‘No More Red’ campaign against knife crime, have improved their form in recent weeks so this is a setback they will not have expected.

They were unlucky against Premier League leaders Manchester City on New Year’s Day but failed to show any of the same application here.

Eddie Nketiah’s weak header from a cross by Saka – who was the brightest player for the visitors – was the best they could muster.

The record FA Cup winners have lost only twice in the third round since 1996 – and both times were at the hands of Forest.