Match of the Day returns to BBC One on Saturday 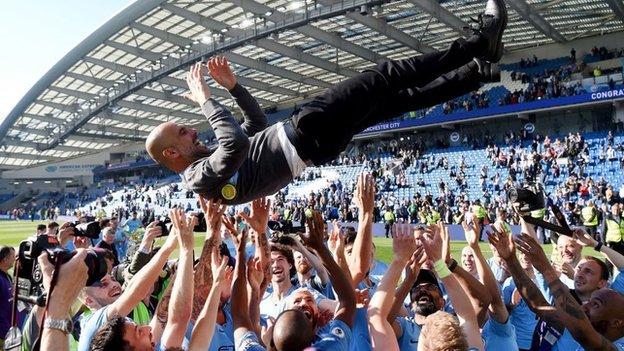 Match of the Day will return on Saturday as part of a variety of football content on BBC One and BBC iPlayer this weekend.

Football in England has been suspended until at least 30 April because of the coronavirus outbreak.

But the BBC will continue to provide programmes featuring interviews, debate and repeats of FA Cup classics.

This includes Match of the Day, in a new visualised version of the new MOTD podcast, at 22:20 GMT on Saturday.

In the new show, Gary Lineker, Alan Shearer and Ian Wright debate the greatest captains of the Premier League era.

Earlier in the day, at 12:00 GMT, Dan Walker introduces some of the best interviews and features from the season so far on Football Focus.

At 16:00 GMT, Guy Mowbray unearths some memorable games, including Watford v Arsenal from 1987 and the 1978 match between West Bromwich Albion and Nottingham Forest, in the first part of his FA Cup quarter-final classics.

The second part, which features Everton v Ipswich in 1985, Derby v Sheffield Wednesday in 1993 and Manchester United v Portsmouth in 2008, is on BBC One on Sunday at 16:40 GMT.

Also available to watch on BBC iPlayer are a range of sport documentaries:

More can be found on BBC iPlayer here.

The Match of the Day: Top 10 podcast is now available only on BBC Sounds, with a new episode dropping every Wednesday thereafter for 11 weeks. Listen to the first episode here.