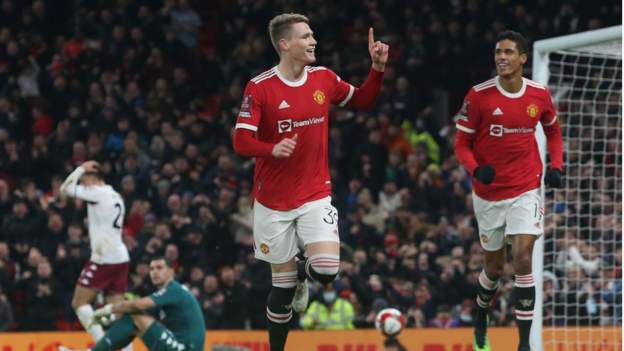 McTominay was allowed to run unchallenged to the edge of the Villa six-yard box, where he met Fred’s perfectly weighted cross to steer the ball past Emiliano Martinez.

The goal condemned Villa boss Steven Gerrard to an unhappy return to Manchester, where he was baited by the home supporters because of his allegiance to Liverpool.

However, the result was incredibly harsh on Gerrard and his team.

Twice in a matter of minutes early in the second period they had the ball in the United net, only for both to be ruled out.

The second was a straightforward offside goal against Danny Ings, albeit the flag was not raised until after Ollie Watkins had put the ball in the net.

However, the first was far more debatable and involved a lengthy wait for VAR to ask Michael Oliver to make final decision by consulting the screen, the referee eventually ruling Jacob Ramsey was offside and impeded Edinson Cavani in the build-up.

Villa’s recent record in this competition has been awful. Their last victory was a third-round replay against Wycombe in 2016, meaning by next year’s competition, they will have gone seven seasons without winning a match in it.

They could easily have avoided that sorry statistic given their part in a breathless all-top-flight encounter, which was full of attacking invention and defensive errors.

John McGinn and Emiliano Buendia both tested David de Gea. Watkins beat the United goalkeeper but not the crossbar before Ramsey’s goal-bound shot was deflected narrowly wide by the legs of McTominay.

The Watkins effort came courtesy of a woeful first touch from Victor Lindelof, who was partnering Raphael Varane in the absence through injury of Harry Maguire and Phil Jones.

Lindelof’s attempt to control a high ball facing his own goal only resulted in the Swede propelling it towards his own goal. De Gea did not come for it, leaving the United defender in a shoving match with Watkins which the striker won.

Instead of steering the ball into the far corner, Watkins lifted it past De Gea and on to the bar.

Villa will be aggrieved at Ings’ apparent equaliser being disallowed given the time it took to reach a decision, as fans of both sides became increasingly irritated because they had no idea what was going on.

But this latest effort did not give any indication they know how to do it.

Repeatedly, the hosts gave away possession under little pressure to the extent it was Villa who had the majority of it.

Marcus Rashford had a particularly grim night, blasting his best chance straight at Martinez from an acute angle and failing to follow up on a Mason Greenwood shot that bobbled towards him as the Villa keeper failed to hold. By the time he was replaced by Jesse Lingard four minutes from time, the England man looked a thoroughly dispirited figure.

He has now gone 11 games without a goal and has not found the net since scoring in the 3-0 win at Tottenham on 30 October.

“He’s trying hard and done well in training in last couple of days,” said Rangnick. “For strikers, it is important to score goals. It would be good for Marcus to score but as long as he’s trying and training well I don’t see a problem.”

This was also an evening when those who feel Cristiano Ronaldo is at the root of United’s problems were given food for thought.

Ronaldo was missing with what Rangnick described as “minor problems” but the spark and fluidity United have been missing in recent times did not reappear.