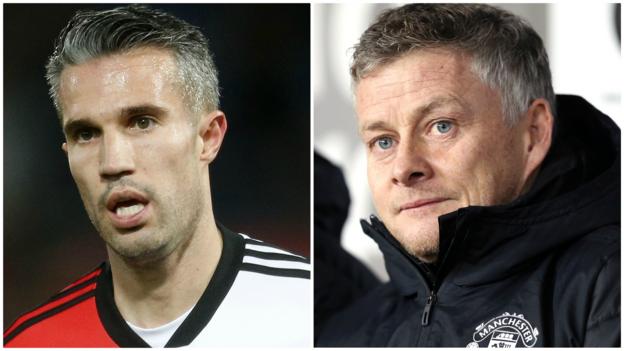 Van Persie said he was not happy with Solskjaer’s demenour after Wednesday’s 2-0 defeat by Arsenal, telling BT Sport “this is not the moment to smile”.

“I don’t know Robin and Robin doesn’t know me,” Solskjaer said on Friday.

“He probably doesn’t have a right to criticise my management style and I won’t change.”

Van Persie won the Premier League title with Manchester United after joining the club from Arsenal in 2012.

He made 86 appearances for the club, scoring 48 goals, before moving to Turkish side Fenerbahce in 2015.

“Yeah Robin, he took my [shirt] number 20 and that’s probably all he’s going to take from me as well,” Solskjaer said.

Manchester United are fifth in the Premier League, trailing fourth-placed Chelsea by four points, but they have yet to win three Premier League games in a row this season.

They face Wolves in the third round of the FA Cup on Saturday.

With Scott McTominay ruled out for eight weeks with a knee ligament injury and Paul Pogba missing for a minimum of four weeks after ankle surgery, United’s lack of midfield options is again causing Solskjaer a headache.

United will have Fred and Nemanja Matic available for the FA Cup tie against Wolves at Molineux.

There had been talk about Matic leaving Old Trafford during the current transfer window but Solskjaer has ruled that out and it is understood midfield is one of the areas the club are trying to strengthen.

Their problem is that while players in that position are available – former Liverpool player Emre Can is surplus to requirements at Juventus – the club do not want to get bounced into either paying too much for a player they do want or signing someone as a short-term measure, even if the consequence is continued on-field inconsistency.

“We have been looking to strengthen the squad in different positions,” said Solskjaer. “But in midfield, at the start of the season we had four fit players for two positions and we didn’t find the right one for the value.

“Of course, [the injuries] are a big blow. You could probably handle it with three players rotating.

“If you’ve got two fit it is a hard task for them. We will just have to ask them to keep going if they can. You can’t just accept we’re tired.”

After the confusion of Wednesday night, Solskjaer also clarified Pogba’s injury situation, stating the Frenchman’s latest surgery has been to clear up some bone fragments around the ankle.

“If the player is not happy with what he’s feeling and he’s got loads of pain, then it might be a worry it can get worse,” said Solskjaer.

The United boss was not impressed by the comments of Pogba’s high-profile and controversial agent Mino Raiola, who this week accused the club of “ruining” players and said he would no longer send his to Old Trafford.

Asked if agents should be offering their opinions on clubs, Solskjaer said: “No.”

Neither did he think it would be wise for Pogba to start talking in public himself, believing the best way for United’s £89m record signing to deal with criticism is through his performances.

“Paul is a top player who we have missed this season,” he said.

“He is very committed to coming back and playing well for us but it’s hard to talk when you’re injured. His talking needs to be done when he comes back on the pitch.

“The most important thing is that we get him fit.”