Man City 4-1 Man Utd: ‘City prove a point to anyone who doubted them’

It looked like Manchester City felt they had a point to prove against Manchester United on Sunday and their second-half performance was an emphatic statement to anyone who doubted them.

This was a response I saw coming, too. City were always going to dip a little bit at some point this season because the standards they have set have been nothing short of amazing – it is credit to Liverpool that they are even still near the Premier League leaders after the run that Pep Guardiola’s side were on until they lost to Tottenham two weeks ago.

So, after seeing City lose one game – in the last minute – to Spurs, and then scrape through against Everton with a bit of luck last weekend, it was no surprise to me to see them come out for a huge game like a Manchester derby and absolutely batter United, because that is what great teams do.

The way United collapsed at Etihad Stadium was unacceptable, and Ralf Rangnick’s side deserve criticism for the way they finished the game, but you also have to recognise United were playing against a phenomenal City team that has some unbelievably talented players and also possesses an amazing work ethic too.

You cannot only play for half a game against City and United found that out, the hard way.

I actually thought United did well for the first half-hour on Sunday.

They committed lots of men forward on the counter-attack and they even tried to win the ball back high up the pitch, which was quite impressive to watch.

It was a risky way of playing, but it was probably what United’s fans wanted to see – their side having a go, and trying to be competitive in the game.

It worked – United caused City problems in that opening period, and had some decent chances.

Of course, when you take the game to City like that, their quality means you are going to give chances away yourself when they break through your lines.

As the first half wore on, City had more and more possession and were 2-1 up, but United still looked dangerous and were right in the game. It set us up for a great second half – but United just didn’t turn up.

One of the most disappointing things about their display after the break was their lack of concentration. It led to Riyad Mahrez scoring City’s third goal, and it was the same with lots of other chances they gave away. Their players kept switching off at key times.

Even worse than that, though, was seeing their reaction after going 3-1 down. It seemed like they didn’t have the desire or the fitness to get back into the game, or even have a go at City.

I don’t know if that was down to complete fatigue because of who they were playing against, or if it was a demonstration of their lack of belief.

Either way, United didn’t just lose the game, they capitulated. It looked like they realised they were done and, whatever the reason, had nothing more to give. Seeing that happen must be a real worry for Rangnick.

De Bruyne was a joy to watch

Even before City scored their third and fourth goals, it felt like there was an inevitability about the result because of how dominant they had become.

It’s hard to pick out individuals from a display like that because it was a collective effort from some wonderful players, and I loved how none of them ever stopped working.

Bernardo Silva and Rodri’s work ethic in the middle of the pitch, to always get back and help their defenders, and then to also press and do all the other things you want from your midfielders, was just incredible.

It was going forward where City were really impressive, though. I’m not surprised Guardiola praised Kevin de Bruyne afterwards, because he was at his absolute best and it was a joy to watch.

De Bruyne is like poetry in motion when he is on top of his game like that, and it is difficult to stop him however you are set up, especially when you have got the attacking players around him that City do.

Again, Silva contributed in that way too – he set up their first goal – while Jack Grealish looked full of confidence and Mahrez just came alive as the game went on.

Phil Foden also impressed me, playing as a false nine, and demonstrated his ability to understand the game in that area of the pitch and make a real impact.

It felt like Foden and De Bruyne were leading City’s attack, and United could not cope with either of them.

City now have 10 league games to go and we already know Liverpool are the only team that can stop them retaining their title.

We are all looking at 10 April, when Jurgen Klopp’s side come to Etihad Stadium, and of course that will be a massive game between two fantastic teams who are going head to head again.

That’s the big one, and I can’t wait, but I just feel there will be some other twists and turns along the way as well.

Everyone expects both teams to win every other game apart from that one, when they play each other, but football is not like that, and it is going to be fascinating to see where they do drop points over the coming weeks.

As for United, well they have got much bigger problems. 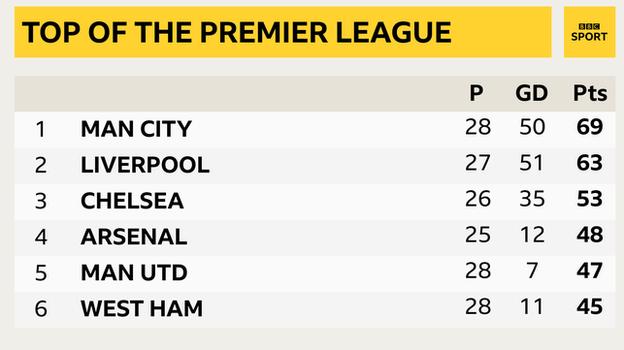 Arsenal are above them and have got three games in hand but, more importantly, United are not playing particularly well and they have got a tough run-in.

They still have Chelsea and Liverpool to play and, on this evidence, they are going to struggle against them. It would be a huge shock now for them to finish fourth and make next season’s Champions League that way.