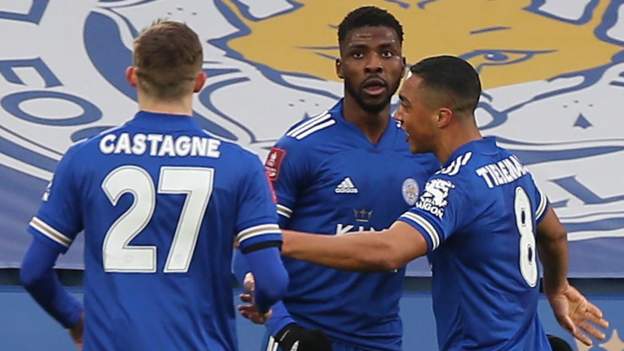 Brendan Rodgers’ side will face Southampton at Wembley with Chelsea and Manchester City meeting in the other semi-final.

Leicester, who lost to eventual winners Tottenham in the 1982 semi-final, were the more vibrant and positive team against off-colour United as manager Ole Gunnar Solskjaer once again tasted defeat in the latter stages of a cup competition, his ploy of resting the likes of Bruno Fernandes and Luke Shaw failing to produce the desired result.

The Foxes’ hero was in-form striker Kelechi Iheanacho, who struck twice and now has nine goals in nine games.

He took advantage of Fred’s awful backpass to round Dean Henderson to score in the 24th minute after the hapless Brazilian was played into trouble by captain Harry Maguire.

Mason Greenwood crowned a crisp United move to equalise before half-time but Youri Tielemans restored Leicester City’s lead with a fine low shot seven minutes after the break before Iheanacho took advantage of shocking marking at a free-kick to head in Leicester’s third after 78 minutes.

Injuries have robbed Leicester of the creative edge provided by James Maddison and Harvey Barnes, as well as the defensive excellence of James Justin, but they still had too much for miserable Manchester United here.

And it was fitting that the two players who got the goals to secure that precious semi-final place, and only their second win over United in 23 years, were Iheanacho and Tielemans – the Foxes’ two most influential performers.

Iheanacho has had mixed fortunes since his £25m move from Manchester City in August 2017 but it is testimony to the player’s own attitude and persistence, alongside the patience and coaching of manager Rodgers, that he has re-emerged as such an influential figure.

He has always had the natural scorer’s instinct but here he provided goals and link-up play while the cultured Belgian Tielemans was the architect of most good things.

Leicester City will now face Southampton – the team they beat 9-0 at St Mary’s last season – but the prize at stake is now so enticing it is unlikely there will be a hint of complacency from Rodgers and his players.

There could have been nerves when Jamie Vardy missed the sort of opportunity he normally gobbles up at 2-1 but there was no wavering in self-belief and Iheanacho’s second sealed the deal.

Leicester are in a very favourable position in the Premier League’s top four and now have an FA Cup semi-final to look forward to in what is shaping up to be a potentially memorable season.

Solskjaer rolled the dice with his team selection, leaving two of his outstanding recent performers Bruno Fernandes and Luke Shaw on the bench.

It backfired as United produced a lacklustre, error-strewn display, the flaws in Solskjaer’s plan made clear by the desperate decision to introduce four substitutes – Fernandes, Shaw, Edinson Cavani and Scott McTominay – in one full hit after 64 minutes.

He kept faith with Fred amid all this despite the Brazilian being central to their struggles, especially when he gifted Iheanacho his first – although he was put out of his misery later.

United have shown progress this season but Solskjaer can now add an FA Cup quarter-final loss to his four semi-final defeats since taking charge at Old Trafford – and he can have no complaints here.

Solskjaer’s team were uninspired, with captain Maguire having a torrid time with the pace and running of Iheanacho and Vardy. Maguire must also take his share of the blame for a high-risk pass that played Fred into a measure of jeopardy for Leicester’s opener.

United look safe in the Premier League’s top four and have a favourable Europa League quarter-final draw against Granada from Spain but this was once again a very disappointing performance when the prize for the winners was an FA Cup semi-final against Southampton.

‘Two games from history’ – what they said

Leicester City manager Brendan Rodgers to BBC Sport: “I’m obviously delighted. It was a great team performance. Every aspect of the game was complete. We showed courage to play football against one of Europe’s greatest teams. I’m so happy for the players. I thought we thoroughly deserved it.

“Kelechi has always contributed. Maybe his confidence was lower but he works so hard every day and always comes in and gives his all. You see his confidence now. He’s at the top of his game. It’s a different structure [up front]. Kelechi is probably best with someone up there with him. Those two are working very well.

“Our solidity and intensity of press was very good. When we dropped into our shape we denied them space. To beat Manchester United 3-1 you have to be complete in all aspects of the game and the players did that.

“[The semi-final] is a way off yet. I told the players they were three games from history. Now it’s two. We’re making the right steps, we’re on the right path. We’re very ambitious to be the best we can be. That’s the challenge and it’s the test we’re enjoying.”

Manchester United boss Ole Gunnar Solskjaer to BBC Sport: “We didn’t have the spark tonight – but it’s understandable. This team have been fantastic in the last three or four months. We played every three days and been on a great run. It just caught up with us – all the games and travels. Thursday night in Milan was a big night and took a lot of out of us physically. We didn’t have the extra zip, authority and confidence.

“We tried to get on the front foot and start well because sometimes you can get that adrenaline boost and confidence if you get a goal and that can carry you over the line. We’ve got too many players that have played too many games and too many that haven’t really had much football; Anthony Martial, Donny van de Beek, Paul Pogba and others are trying to get in who haven’t had enough football. We didn’t have enough against a tough team.

“When we win, we win together and when we lose, we lose together. We’re not pointing fingers and blaming – the second one is a good goal by the boy but maybe with a zip of energy we could’ve got to him and wouldn’t have been done as easily in the middle.

“We’ve got the Europa League and Premier League to concentrate on – yes, we would’ve liked to go to Wembley but now the focus is on the games we have. We’re in a good position in the league and we want to keep improving. Of course Leicester are just behind us so it won’t be easy but we want to keep going and get as far as possible in the Europa as well.”

On changing the line-up, Solskjaer added: “I would’ve done the same again, the changes were necessary to do. We knew Paul [Pogba] wouldn’t last more than an hour and I don’t think I would do anything differently. What goes on behind the scenes isn’t always known.”