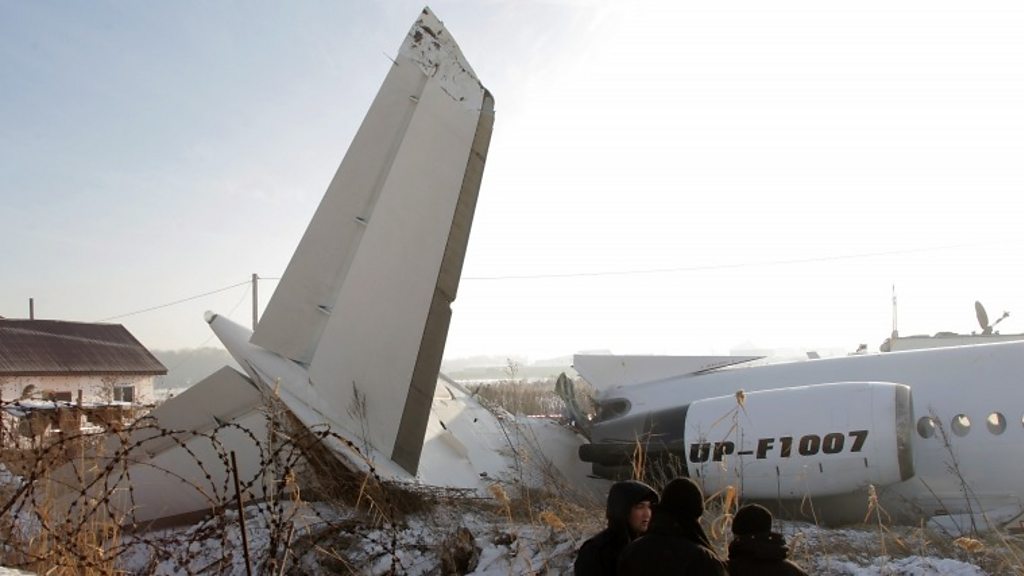 A passenger jet has crashed in Kazakhstan, killing at least 12 people but leaving dozens of survivors.

The Bek Air plane was flying from Almaty – Kazakhstan’s largest city – to the capital Nur-Sultan when it smashed into a building just after take-off.

The Fokker aircraft had 100 passenger and crew on board. Survivors described walking from the wreckage into the dark and snow.

About 60 are being treated in hospital. The cause of the crash is unclear.

A Reuters reporter close to the scene said there was heavy fog at the time.

There has been conflicting information about the death toll. The interior ministry initially said 15 people had been killed, but it later published a list of victims that mentioned only 12 dead – including the captain.

What’s known about the crash?

The Fokker 100 plane was carrying 95 passengers – including eight children – as well as five crew, the interior ministry said.

The Flightradar24 information website said the flight departed at 01:21 GMT, and “the last signal was received in that same minute”.

The airport said the plane lost height at 07:22 local time (01:22 GMT), before striking a concrete barrier and crashing into a two-storey building. There was no fire upon impact.

One survivor, businessman Aslan Nazaraliyev, told the BBC that the plane began vibrating violently after take-off. People screamed and the aircraft smashed into the ground.

He said part of the plane was crushed like “an aluminium can”, and those in the front rows were badly injured or killed.

He and others managed to get out and helped fellow passengers to safety. “It was ugly. It was dark. We were lighting with cell phone lights,” Mr Nazaraliyev said.

Almaty’s airport said it was operating normally and the flight schedule was unaffected.

Nur-Sultan – a city formerly known as Astana – was renamed after former-President Nursultan Nazarbayev shortly after he stood down in March .

What’s been the reaction?

A special commission will be set up to determine the cause of the crash.

Kazakhstan’s President Qasym-Jomart Toqayev has declared a day of national mourning on Friday.

He expressed his “deep condolences” to relatives and said “all those responsible will be severely punished in accordance with the law”.

What are the odds of surviving a plane crash?

A survey of crashes in the US between 1983 and 2000 found that 95% of aircraft occupants survived accidents, including 55% in the most serious incidents.

A study of crashes worldwide by the European Transport Safety Council has found that 90% are survivable.

And of course, flying remains the safest way to travel. Your chances of being in a crash in the first place are vanishingly small.

In 2018 – an average year in terms of aircraft accidents – 514 people died worldwide in crashes involving commercial flights, from a total of over 4bn passengers.

What is known about Bek Air?

Nowadays, the company describes itself as Kazakhstan’s first low-cost airline. Its fleet is made up of seven Fokker-100 aircraft.

The Fokker-100 in detail

This is not the first serious plane crash in the city. On 29 January 2013, a passenger plane travelling from the northern town of Kokshetau came down near Almaty, killing 20 people.

A month earlier, 27 people died when a military plane carrying senior Kazakh security officials crashed in the south of the country.

Are you in the area? Did you witness the incident? If you feel able to do so please get in touch. Email [email protected].