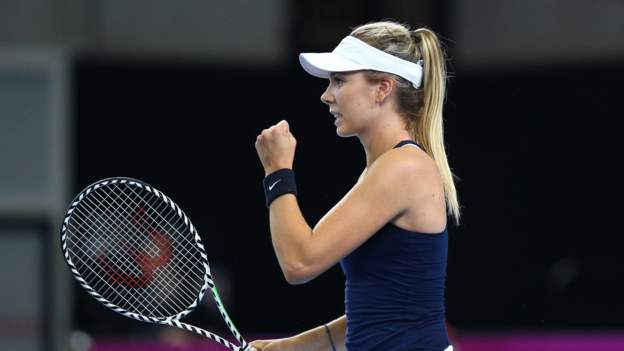 Katie Boulter battled back from a set down to beat Jodie Burrage 3-6 7-6 (7-4) 6-2 and win the Progress Tour Women’s Championships.

Burrage is ranked higher at 289th in the world, but Boulter – who is returning from a back injury – was favourite to win the domestic tournament at Roehampton.

The 23-year-old’s career-high ranking is 82 but she has slipped to 374 after four months away from tennis.

“Sometimes you’ve just got to find a way and I felt like I did that today. To get my body through five matches is a huge bonus for me – that was the aim I came into this week with.”

The two players exchanged breaks of serve initially, but it was Burrage who went ahead to take the first set.

After being made to work hard to hold serve early in the second set, Boulter eventually broke the stalemate to go 4-2 up.

Another break put the 21-year-old 6-5 up, but she could not close out the match as Boulter broke back to take the second set to a tie-break.

Boulter upped her level to take it to a third set and continued to dominate from there, breaking serve twice and sealing victory.

British number two Heather Watson and Harriet Dart were both due to compete in the event, but pulled out with ankle and groin injuries respectively. Katie Swan also withdrew after retiring in her match on Tuesday because of a hip injury.

Players called their own lines and collected balls under coronavirus restrictions at the tournament. There was also a doubles event, won by Alicia Barnett and Olivia Nicholls, and a Division One singles event, won by Amelia Bissett.