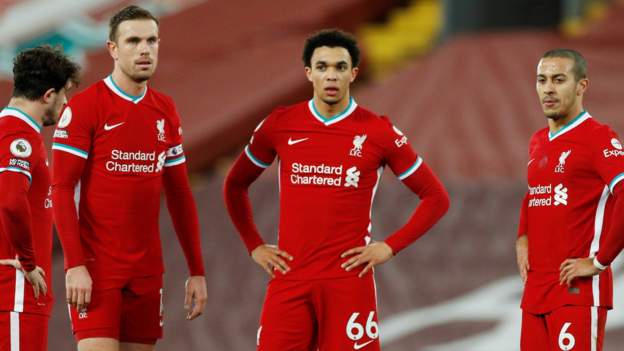 Liverpool boss Jurgen Klopp says his side were “not fresh enough, mentally and physically” as Brighton consigned them to a second straight home defeat.

Steven Alzate scored the only goal of the game to inflict further damage on the Reds’ faltering title defence.

They are now seven points behind Premier League leaders Manchester City, having played a game more.

“It has been a really tough week with two away games, two very intense games,” said Klopp.

“We looked really like we weren’t fresh enough, mentally and physically.

“There were a lot of moments where we gave the ball away too easily, in moments the boys looked tired mentally. I know they can pass the ball from A to B but it didn’t happen. We made it easy for Brighton, but they also did really well.

“Brighton deserved to win, no doubt about it. For me, it’s more important to find an explanation for why we lost this game and understand what happened here tonight. We didn’t look convincing.”

After going 68 games without a league defeat at Anfield, Klopp’s side have now also lost back-to-back games there, with Wednesday’s result coming two weeks after the 1-0 home loss to Burnley.

It was a deserved loss to the Seagulls too, with Graham Potter’s side having more shots, more shots on target and creating the better chances.

“The only explanation now is that we are a fatigued team, mentally more or less,” added Klopp, speaking to BT Sport. “That leads to not the maximum freshness in your legs.

“The only thing we can do is use the things that happen and learn from them. The solution is always the players. It has been a tough week and tonight it was not enough. City are flying and we have to find solutions.”

Wednesday’s game was Liverpool’s eighth since the turn of the year, the same amount as Brighton. Manchester City have played 10, as have second-placed Manchester United.

‘As it stands, we’re not in the title race’

The result leaves the Reds fourth in the table, behind both Manchester clubs and third-placed Leicester City.

“We were hugely disappointing all over the park,” defender Andy Robertson told BT. “You have to give [Brighton] credit for playing well. They created chances, pressed us – did everything we wanted to do. When you don’t show up you don’t get results.

“We prepare for every game different. It’s just not clicking. We need to find a way to get results, especially at home. You can do everything in training.”

Liverpool can get their title defence back on track on Sunday, when they face Pep Guardiola’s Manchester City at Anfield (16:30 GMT kick-off).

“Any game against Manchester City is a big one,” added Scotland captain Robertson. “As this moment stands, we’re not in the title race. We are seven points behind them and they have a game in hand.

“I’m sure they’d say the same if they were potentially 10 points behind. We need to get back to the Liverpool everyone knows.

“We’re still a good team. We don’t turn into a bad team overnight.”

Earlier on Wednesday, City won 2-0 at Burnley to make it nine wins on the bounce in the Premier League and 13 in all competitions.

When asked about Liverpool’s title credentials and the importance of Sunday’s game, Guardiola said: “Of course [Liverpool] are a contender at the end to be champions, but it is for three points, like today.

“We have won six games in a row against teams in lower positions in the table. We know exactly how tough it was to win with many of these clubs. We had to do our best.