Jamie Murray: ‘I don’t know how long they could push Wimbledon back’ 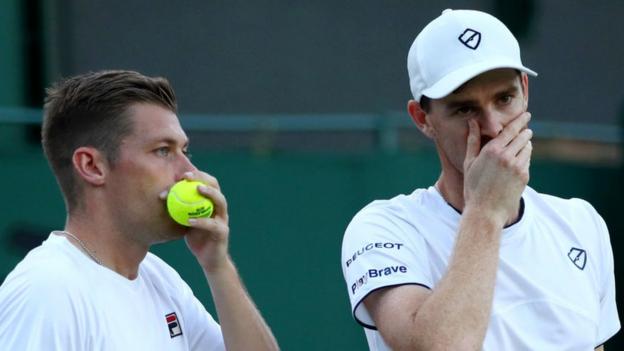 Two-time champion Jamie Murray says the All England Club face a considerable challenge rescheduling Wimbledon if it is postponed because of coronavirus.

A decision regarding this year’s event will be made next week while the pandemic has already pushed May’s French Open to the autumn.

Wimbledon, scheduled for 29 June-12 July, could be cancelled altogether.

“I don’t know how long they could push it back,” Murray, 34, told BBC Scotland’s The Nine.

“They’re desperate to have their event on, it’s still over three months away and a lot can change in that time,” added the two-time Wimbledon mixed doubles champion, the older brother of two-time singles champion Andy.

“For them, optics don’t necessarily look great, I guess, if there’s sporting events all over the world getting cancelled and they’re trying to crack on with things.

Murray, who has won mixed doubles tournaments at Wimbledon, three at the US Open and a men’s doubles title at both the US and Australian Opens, says being at home for an extended period is “weird”.

“I’ve been travelling the world for the last 15, 16 years maybe longer,” he explained. “It’s a big mindset switch. To be told that you might be home for four, five months – I’m not complaining too much.

“I just hope that everyone’s taking the utmost precautions they can.

“No-one really knows when we’re going to get back out on court and able to compete, whether that’s behind closed doors, which I don’t think anyone really wants.”