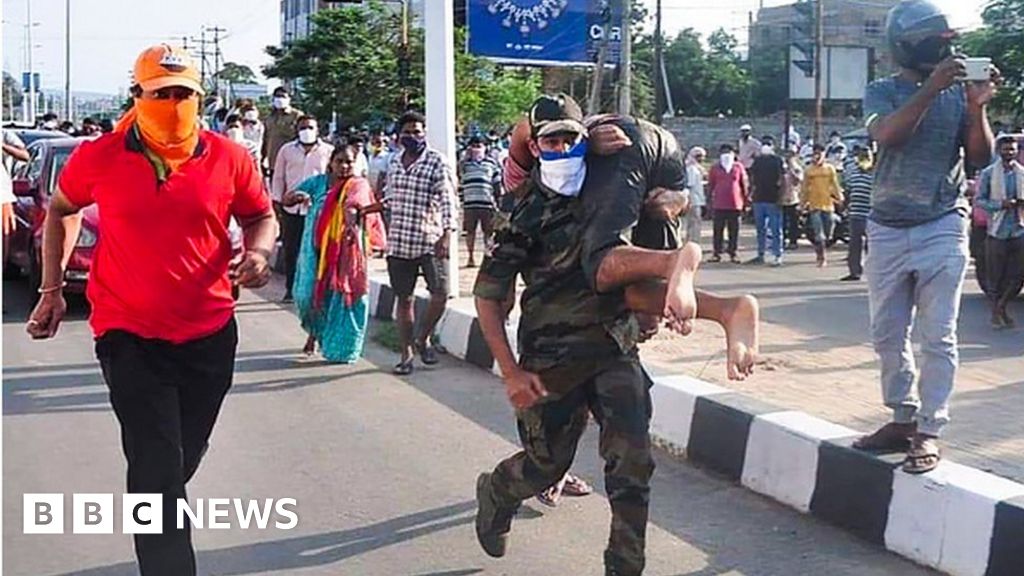 At least 13 people have been killed by a massive gas leak at a chemical plant in southern India, with hundreds of others taken to hospital.

The leak from the LG Polymers plant in the city of Visakhapatnam in Andhra Pradesh state came as people slept.

Doctors say patients have been complaining of a burning sensation in the eyes and difficulties breathing.

Areas around the plant have been evacuated. The leak may have been due to negligence, officials say.

Reports suggest initial attempts to control the gas leak were unsuccessful but the company and state officials say the situation is now under control.

Rajendra Reddy, a senior official in the Andhra Pradesh Pollution Control Board, told the BBC that the leaked gas was styrene, which is usually refrigerated.

‘My eyes were itchy’

The leak took place at around 03:00 local time (21:30 GMT Wednesday) when plant was being re-opened for the first time since 24 March, when India went into lockdown to curb the spread of coronavirus.

“All those who have been hospitalised are currently stable,” BK Naik, a local health official, told Reuters news agency. Some reports said patients were unconscious, or on ventilators.

The state Industries Minister Goutam Reddy told BBC Telugu that it looked as though proper procedures and guidelines were not followed when the South Korean-owned plant was being re-opened.

Swaroop Rani, a senior police official in Visakhapatnam, told AFP that the plant had been left idle because of the lockdown.

“[The gas] was left there because of the lockdown. It led to a chemical reaction and heat was produced inside the tanks, and the gas leaked because of that.”

Local villagers complained around 03:30 and police immediately went to the scene, but had to quickly retreat for fear of being poisoned, the news agency quoted her as saying.

“One could feel the gas in the air and it was not possible for any of us to stay there for more than a few minutes,” she said.

As the gas spread, residents ran out of their homes in panic. Distressing images of people fainting and dropping unconscious on the streets are being shared on social media.

“My eyes were itchy, and I was feeling drowsy, light-headed and slightly breathless,” Yashwanth Saikumar Ambati, who lives about 300 metres from the plant, told Reuters.

Some factory employees are believed to have been inside when the leak occurred, but officials said they had no information about them.

It is feared that the fumes have spread over a radius of about 3km (2 miles) and officials have been evacuating people from surrounding areas.

At least 1,000 people had been sent to hospitals and many others were feared to be unconscious in their homes, district health official Dr Naik said.

“There are people who were sleeping,” AFP quoted him as saying. “We are working to get people to the hospital. They need oxygenation and fresh air.

“We are trying to understand the long-term impact of the chemical on those who have inhaled it during the leak.”

In the meantime, officials have asked people to protect themselves by covering their faces with a wet cloth. The Indian navy has been helping supply oxygen to patients.

India has a tragic history of gas leaks.

In 1984, a toxic chemical leak in a pesticide plant in the central city of Bhopal killed thousands of people, in what is acknowledged to be the world’s worst industrial disaster.

More than 35 years later, victims say children are still being born with disabilities because of the effects of the methyl isocyanate gas spill.

What is Styrene and how can exposure affect humans?

Information from the PHE Centre for Radiation, Chemical and Environmental Hazards and US Environment Protection Agency