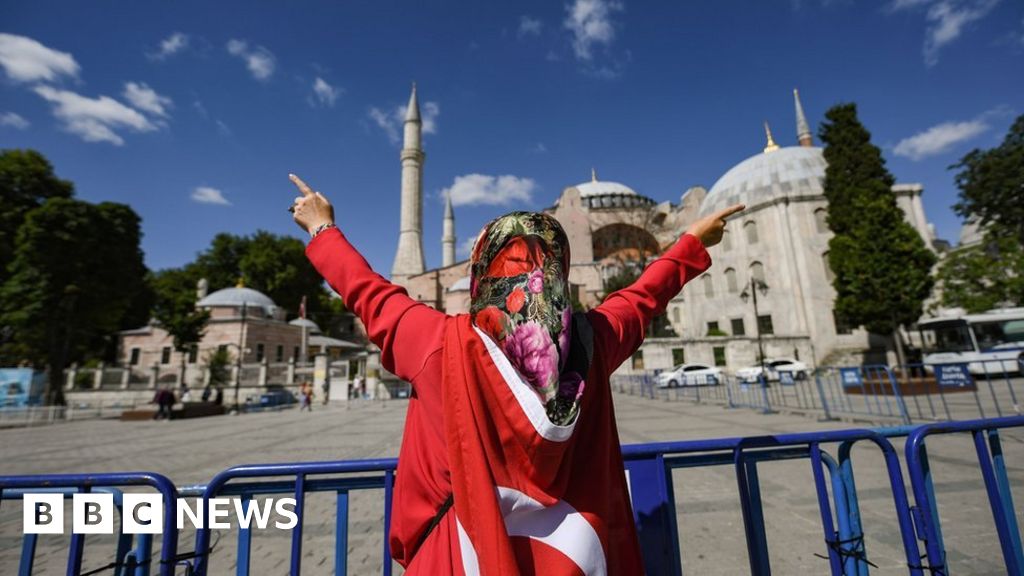 The world-famous Hagia Sophia museum in Istanbul – originally founded as a cathedral – has been turned back into a mosque.

Built 1,500 years ago as an Orthodox Christian cathedral, Hagia Sophia was converted into a mosque after the Ottoman conquest in 1453.

In 1934 it became a museum and is now a Unesco World Heritage site.

Islamists in Turkey long called for it to be converted to a mosque but secular opposition members opposed the move. The proposal prompted criticism from religious and political leaders worldwide.

Defending the decision, President Erdogan stressed that the country had exercised its sovereign right in converting it back to a mosque.

He told a press conference the first Muslim prayers would be held inside the building on 24 July.

“Like all our mosques, the doors of Hagia Sophia will be wide open to locals and foreigners, Muslims and non-Muslims,” he added.

Shortly after the announcement, the first call to prayer was recited at Hagia Sophia and was broadcast on all of Turkey’s main news channels. The cultural site’s social media channels have now been taken down.

Unesco has said it “deeply regrets” the decision to turn the museum into a mosque and called on the Turkish authorities to “open a dialogue without delay.”

The organisation had urged Turkey not to change its status without discussion.

The head of the Eastern Orthodox Church has condemned the move, as has Greece – home to many millions of Orthodox followers.

Culture Minister Lina Mendoni said it was an “open provocation to the civilised world”.

“The nationalism displayed by President Erdogan… takes his country back six centuries,” she said in a statement.

The court ruling “absolutely confirms that there is no independent justice” in Turkey, she added.

But the Council of State, Turkey’s top administrative court, said in its ruling on Friday: “It was concluded that the settlement deed allocated it as a mosque and its use outside this character is not possible legally.”

“The cabinet decision in 1934 that ended its use as a mosque and defined it as a museum did not comply with laws,” it said.

The Church in Russia, home to the world’s largest Orthodox Christian community, immediately expressed regret that the Turkish court had not taken its concerns into account when ruling on Hagia Sophia.

It said the decision could lead to even greater divisions.

While the move is popular with conservative religious supporters of President Erdogan, Turkey’s most famous author, Orhan Pamuk said the decision would take away the “pride” some Turks had in being a secular Muslim nation.

“There are millions of secular Turks like me who are crying against this but their voices are not heard,” he told the BBC.

History of a global icon