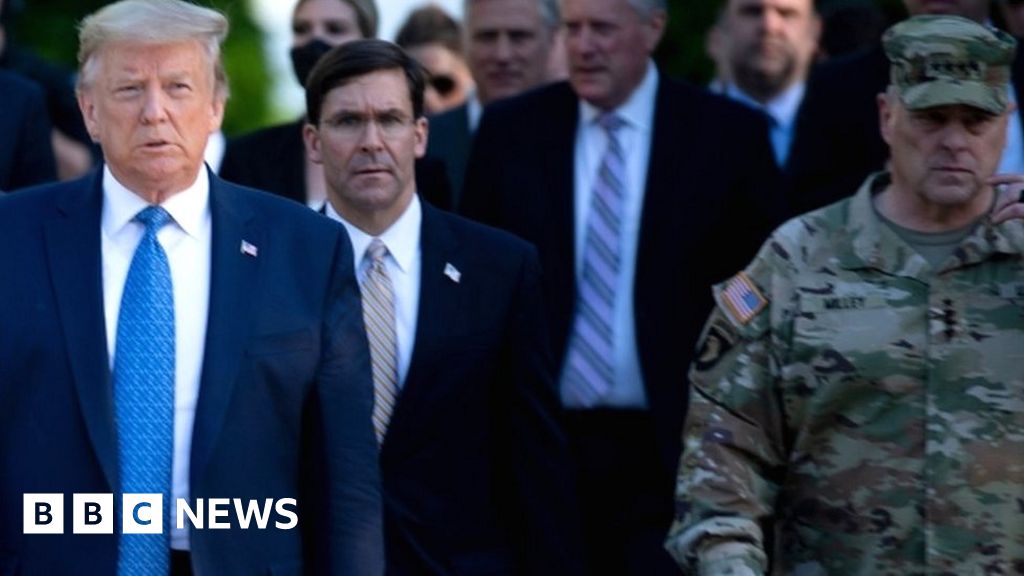 The top US military officer has said he was wrong to have joined President Donald Trump during his controversial walk to a church near the White House.

Mr Trump walked to the damaged church and held up a Bible, after people protesting at the death of African American George Floyd were cleared.

The use of troops to tackle the protests has provoked fierce US debate.

Mr Trump has regularly referred to “law and order”, calling in the National Guard to the US capital and condemning violent protests.

A peaceful demonstration was cleared in Lafayette Square next to the White House with pepper spray and flash-bang grenades so that the president could have a photo opportunity.

The basement of the St John’s Episcopal Church had been burned the previous day.

Gen Milley, chairman of the joint chiefs of staff, was speaking in a video for a National Defense University commencement ceremony.

He says: “I should not have been there. My presence in that moment and in that environment created a perception of the military involved in domestic politics.

“As a commissioned uniformed officer, it was a mistake that I have learned from, and I sincerely hope we all can learn from it.”

Defence Secretary Mark Esper was also on the walk and, although he has not said he was wrong to be there, has suggested he thought the walk was for a different purpose of mingling with troops and inspecting damage.

A number of religious leaders criticised the president for his walk, although he insisted most were fine with it.