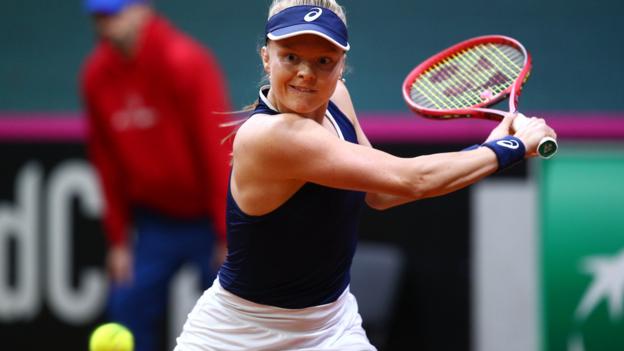 The reverse singles and doubles rubber will be played on Saturday in the best-of-five tie at the AXA Arena.

The winner of the tie will join 11 other nations at the new Fed Cup Finals in Budapest from 14-19 April.

There was much to admire in Dart’s performance but she will rue only taking two of 13 break-point opportunities and her defeat leaves Britain with it all to do on day two.

Watson must beat Kuzmova in the third rubber to keep the tie alive before Dart faces Schmiedlova.

Debutants Naiktha Bains, 22, and Emma Raducanu, 17, are scheduled to play Kuzmova and Magdalena Rybarikova in the doubles, but Keothavong is planning to bring in Dart and Watson if they win their singles matches.

“Harriet’s worked incredibly hard on her fitness, she’s so much stronger now than she ever used to be and Heather’s been in that situation before. I don’t see any problem with singles and doubles,” Keothavong added.

“Heather knows what she needs to do – she’s an experienced player and hopefully she can get us off to the start we need tomorrow.”

World number 141 Dart, 23, was playing her first Fed Cup singles rubber and rose to the occasion against an opponent ranked 76 places above her.

Dart saved three set points when serving at 5-6 in the opener before dominating the tie-break.

She looked like she was about to make a decisive move when creating three break points at 3-2 up in the second set but Kuzmova was eventually able to hold serve after a game of six deuces.

The 21-year-old then got the first break of the match in the next game and another followed when Dart double-faulted at set point down.

Kuzmova put together a run of seven games in a row to lead 3-0 in the final set but three double faults allowed Dart to get back on serve at 3-2.

The Slovak broke again as she moved 5-2 up but Dart was not done, saving one match point when Kuzmova served for it and then four more in an astonishing 10th game of the set, including a breathtaking rally where the Briton somehow retrieved two overheads before her opponent put a forehand wide.

Dart had a break point at 5-5 but missed a backhand and Kuzmova eventually got over the line in the next game with her own backhand winner.

In the first singles rubber, 27-year-old Watson, ranked 74, paid the price for only converting one of nine break points and making 43 unforced errors.

Britain are without world number 14 Johanna Konta, who has opted to sit out the Fed Cup this year to protect her body, and Katie Boulter.

They returned to the World Group for the first time since 1996 by beating Kazakhstan in a play-off last April, and are among eight seeded nations in the qualifiers.

That was unquestionably a very impressive Fed Cup singles debut by Harriet Dart, but the reality is that Britain now need to conjure up something truly remarkable on Saturday.

Heather Watson made far more errors than she could afford to, and was comfortably beaten by a more accomplished clay-court player.

Dart then fought tooth and nail, illustrated perfectly by the defensive skills and nerve she showed to save the fourth match point against her.

Both will now need to win their singles matches on Saturday, before presumably teaming up to win the doubles, if Britain are to be part of the first 12-team Fed Cup Finals in Budapest in April.

How does the new Fed Cup format work?

The eight winners of this week’s qualifying ties will join 2019 finalists Australia and France, hosts Hungary and the Czech Republic in the new 12-team Fed Cup Finals, which will be played on clay in Budapest.

The Laszlo Papp Budapest Sports Arena will host the finals until 2022 and there will be four groups of three teams, with the winners of each group progressing to the semi-finals.

Under the previous format, the champions needed to negotiate three home or away ties. Now they play no more than one.