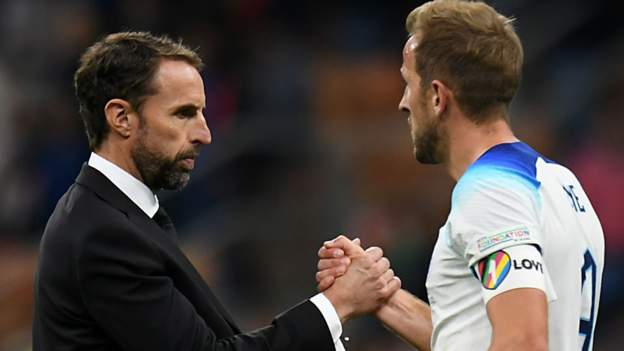 Last updated on 1 hour ago1 hour ago.From the section England

Gareth Southgate has been praised for turning the England shirt into a “cape rather than a straitjacket” by the manager of World Cup opponents USA.

“Gareth has done a great job of helping the players cope with pressure,” US boss Gregg Berhalter said.

“Actually using the jersey as a cape rather than a straitjacket and really giving them the freedom to play on the field, giving them the idea that they can represent their country in a positive way and make the country proud.”

Southgate’s players summoned up a spirited performance – if not the result they were after – as they fought back from 2-0 down to draw 3-3 with Germany at Wembley on Monday night.

Captain Harry Kane said the display showed the “determination, passion and desire to wear this England shirt” , as they drew a line under a winless Nations League campaign that saw them relegated from the top tier.

Despite England’s poor recent run of form, which included a 4-0 defeat at home to Hungary, Berhalter is sure the Euro 2020 runners-up are capable of mounting a challenge in Qatar.

“I think we all agree they have a squad that can win the World Cup,” he said.

England kick off their World Cup campaign in Group B against Iran on 21 November, before matches against USA (25 November) and Wales (29 November).