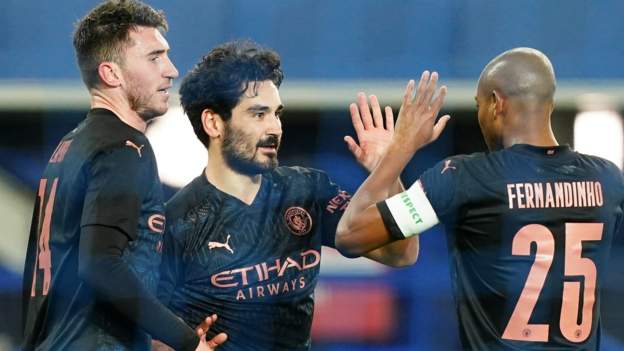 Late goals from Ilkay Gundogan and Kevin de Bruyne broke Everton’s resistance as Manchester City kept their quest for the quadruple on course by reaching the FA Cup semi-finals for a third successive season.

A fiercely contested quarter-final looked like it was heading for extra time as Carlo Ancelotti’s side defended resolutely and went close in the first half when Yerry Mina’s header was cleared off the line.

Despite dominating possession at Goodison Park, City struggled in front of goal for most of the game, with Raheem Sterling’s poorly hit shot tipped round the post by Everton’s third-choice keeper Joao Virginia.

After Pep Guardiola brought on Riyad Mahrez and De Bruyne, they finally breached Everton’s well-marshalled defence when Gudogan headed in with six minutes remaining after Aymeric Laporte’s shot was tipped onto the bar.

De Bruyne then fired in with a crisp shot to ensure their progress in the 90th minute, meaning City have won 25 out of their past 26 games in all competitions.

For Everton, who still threatened despite having little of the ball, it was a sterling attempt to try and stop the City juggernaut.

Despite missing out on a first FA Cup semi-final since 2016, they will now focus on their league campaign in an attempt to reach Europe next season.

“We competed well for 80 minutes against, in my opinion, the best team in the world,” said Everton boss Ancelotti.

“The fact we competed, the fact we defended really well and didn’t concede great opportunities to them for 80 minutes, I’m proud of my players.

“Manchester City is not a normal team, they are the best.”

City boss Pep Guardiola said: “When you have won a lot of games in four months, you are able to adapt and adjust and that is what I am pleased about the most, it is the most difficult thing.

“It is the mental strength to be ready for every single game. November to March is the toughest period in England and what we have done is more than remarkable, it is incredible.

“It is one of the greatest achievements we have done together for a long time.”

City’s pursuit of an unprecedented quadruple has looked seamless at times this season and the late substitutions showed the armoury they can call upon.

Having cruised through the previous stages of the FA Cup, scoring three goals in each of the previous three rounds, Guardiola’s side found it hard to break down a resolute Everton defence, who were missing Michael Keane and had Virginia making only his second start in goal because of injuries to Jordan Pickford and Robin Olsen.

Phil Foden looked most likely to make a breakthrough as he battled it out with Lucas Digne on the right wing, and was perhaps too honest when staying on his feet as he rode a first-half tackle by Mason Holgate. A brilliant take and shot by the winger was inches wide of the post after 65 minutes.

City, who made six changes to the team which beat Borussia Mochengladach to reach the Champions League last eight, did not trouble Everton for much of the game despite dominating possession.

With the clock ticking into the final stages, and Everton digging in, Guardiola was able to bring on Mahrez and De Bruyne to change the game.

De Bruyne had a hand in Gundogan’s opener, as he powered into the box before Laporte let fly, with the German midfielder nodding in his 16th goal in a brilliant season.

With Everton then chasing an equaliser, the game opened up, allowing De Bruyne to make City’s progress safe.

A third successive FA Cup semi-final for the first time since 1934 is a fine achievement, but Guardiola’s team will not be happy unless they finish their campaign with silverware.

Given they are 14 points clear at the top of the Premier League, and face Tottenham in next month’s League Cup final, a domestic treble is now a step closer.

Everton’s abject home form in the league has amounted to losing five of their past seven games, but it has been boosted by FA Cup successes including a thrilling 5-4 win over Tottenham in the fifth round.

This was a more tactical battle, with the hosts picking three centre-backs and attempting to pick off a dominant Manchester City on the break or via set-pieces.

It is a formula which has worked for Ancelotti’s side this season and after defending deep and remaining patient, they had the best chance of the first half when Mina’s header from a corner was cleared off the line by Oleksandr Zinchenko just before the break.

In the surprising absence of unused substitute Keane, the Colombian was colossal in defence, and he marshalled Holgate and Ben Godfrey either side of him, and Allan, who was also impressive in front of the backline.

Given their threat from set-pieces, it was the type of performance that looked like it might bring success, or at least take the game to extra time. From two centres, the ball fell to Richarlison, who fired wide when well placed, while Andre Gomes hit a clean shot over the bar from outside the box.

As Everton tired, the difference in the respective teams’ benches was made clear as Mahrez and De Bruyne were introduced to turn the tie City’s way.

With Ancelotti’s team seventh in the Premier League, their quest for Europe will motivate a team that lost a seventh home game in 12 in all competitions.

However, Everton’s wait to win a trophy for the first time since 1995 goes on.