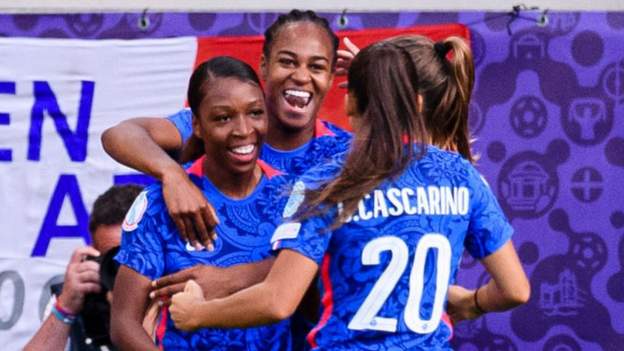 Grace Geyoro scored a hat-trick as France underlined their credentials as one of the favourites to win Euro 2022 by thrashing Italy 5-1 in their Group D opener at Rotherham’s New York Stadium.

Corinne Diacre’s side are looking to win a major tournament for the first time, and they put in a performance that will certainly make other teams sit up and take notice.

Italian forward Barbara Bonansea forced a great save out of goalkeeper Pauline Peyraud-Magnin in the first few minutes, but from then things took a bad turn for Italy as France put on an attacking masterclass.

Geyoro got the first of her goals in the ninth minute when she fired home from the lively Kadidiatou Diani’s cross.

Marie-Antoinette Katoto, widely tipped to win the Golden Boot at this tournament, scored her 26th international goal in her 31st appearance just three minutes later, stabbing in after the goalkeeper had palmed a shot into her path.

Katoto then saw a header hit the post before Delphine Cascarino made it 3-0 with a thunderous strike six minutes before the break.

There was still time for France to score twice more before half-time as Geyoro rolled in after rounding the goalkeeper, before she completed her hat-trick with with a neat finish from 14 yards.

To Italy’s credit, they did improve after the break, although they were fortunate to finish the game with 10 players when Sara Gama had a red card overturned following a VAR review, despite the challenge appearing reckless.

Martina Piemonte then headed in with 14 minutes remaining to give the travelling Italy fans a consolation to cheer.

“We wanted to show what we were made of,” Diacre said. “Hats off to my players. They were high performing from the get go. We felt great synergy between the players on the pitch.

“The proof is in the pudding, we saw this in the first half.”

Ranked third in the world and arriving at the tournament on the back of 14 consecutive victories, France are rightly viewed as being among the leading contenders to win Euro 2022 – even if, to date, success at major tournaments has eluded them.

They have failed to progress further than the quarter-finals in their six previous appearances at the European Women’s Championships, however this performance showed that they have the intention and quality to go much further this time.

Italy simply had no answer to France’s brilliant attack in the first half, with Diani’s trickery and direct running causing panic in the defence, while Katoto – who in addition to her goal provided the assist for Geyoro’s second – highlighted why she is a striker to be feared at Euro 2022.

On this showing, no defence will want to come up against this France attack, which blended skill, pace and clinical finishing to devastating effect.

Defensive work to do for Italy

Having failed to get out of the group stage in 2017, Italy were hoping to do much better this time around. But such a heavy defeat in their opening game is far from an ideal start.

However, they can take heart from their second-half display. As outclassed as they were in the opening 45 minutes, they competed after the break and were unfortunate to not have more than the one consolation goal.

That may have been down to France stepping off in attack to conserve energy, but Italy should take encouragement from how they finished the game as they look to get up and running against Iceland on Thursday.