Euro 2022: Germany win Group B and move into quarter-finals with 2-0 win over Spain 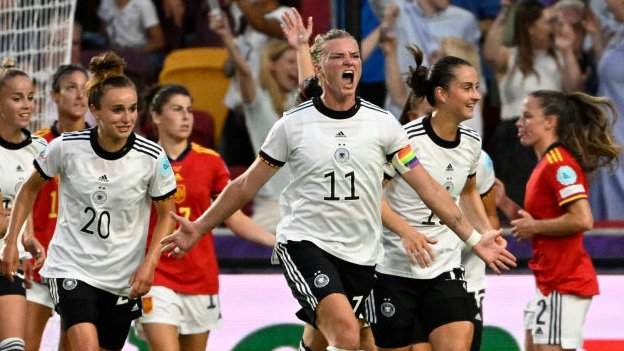 Germany were gifted an early goal when Spanish goalkeeper Sandra Panos’ clearance fell straight to Klara Buhl and she scored with a low strike.

Lucia Garcia had a chance to level, but could only shoot into the side netting.

Alexandra Popp, who only returned to action in March after 10 months out with a knee injury, headed in a second.

The Wolfsburg striker had missed both Euro 2013 and Euro 2017 with ankle injuries, but claimed her second goal at these Euros after scoring as a substitute in the 4-0 win over Denmark on Friday.

Pre-tournament favourites Spain play the Danes on Saturday and the winners will finish second and face England in the last eight, while the losers will be eliminated on the head-to-head rule, which is used if teams finish level on points.

If the game ends in a draw, Spain will finish second thanks to a better overall goal difference.

England, aiming to win the tournament for the first time, recorded the biggest victory in the competition’s history with an 8-0 thrashing of Norway on Monday to finish top of Group A.

Spain lose for first time since 2020

Barca said the surgery was successful, although Putellas, who watched her team while on crutches from the stands in Milton Keynes for that 4-1 win on Friday, will be out of action for between 10-12 months.

That means she is likely to miss all of the 2022-23 season and it could also keep her out of the 2023 World Cup in July and August in Australia and New Zealand.

Both players were severely missed against the Germans with Spain failing to score from any of their 12 attempts.

They had fallen behind after only 50 seconds against Finland and again conceded early, this time inside three minutes.

There looked to be no danger when the ball was passed back to Panos, but her clearance hit Buhl and she took a touch to take it away from Spain captain Irene Paredes before arrowing a finish into the bottom corner.

Spain had chances to score but striker Garcia missed from a tight angle after she had taken the ball around Germany goalkeeper Merle Frohms, while Patricia Guijarro and Mariona Caldentey were also denied.

Germany, fifth in the world rankings and two places above Spain, had only 30% possession, but scored from both their shots on target in front of a crowd of 16,037 at the Brentford Community Stadium.

After the first goal, Popp, starting as Lea Schuller was ruled out after a positive Covid-19 test, glanced in a 36th-minute header from Felicitas Rauch’s corner to put the game beyond Spain.

This loss ended a 24-match unbeaten run for the Spaniards – beaten for the first time since a 1-0 defeat by world champions the United States in the SheBelieves Cup in March 2020.