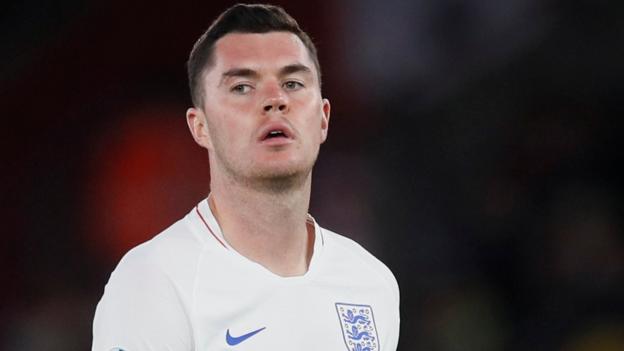 England manager Gareth Southgate says they showed “devastating attacking play throughout” their 5-3 Euro 2020 qualifying win over Kosovo but added “the mistakes were obvious”.

After conceding Valon Berisha’s first-minute goal, the hosts scored through Raheem Sterling, Harry Kane and an own goal before a Jadon Sancho double.

But Berisha and Vedat Muriqi scored again before Kane missed a penalty.

“A bizarre game really,” Southgate told ITV after the win at Southampton.

“There were obvious poor errors for goals but I’m really pleased with the composure we showed. We used the ball well.

“The errors, we have to be better – the players don’t need me to tell them that. The outstanding parts of our play were obvious, the errors were obvious.”

England are top of Group A with four wins from four games, three points above the Czech Republic, and have scored 19 goals.

England suffered the worst possible start at St Mary’s when defender Michael Keane’s sloppy pass across the defence was cut out for Berisha to score after only 34 seconds.

Although the hosts recovered to go 5-1 up, they conceded two quick-fire goals in the second half – including one from the penalty spot after a foul by Manchester United’s Harry Maguire.

Asked if the individual errors were a lack of concentration rather than anything more fundamental, Southgate said: “I think that is something that we have to consider over a period of time because there were obviously mistakes that were concerning, really.

“What I would say is generally as a team, they recovered from those errors, although there is nothing worse than a losing lead for making a team feel uncomfortable.

“I think that generally speaking, they took control back of the game, and even the likes of Mason [Mount] coming on at the end, that is not an easy position for a young player to go in but we know he’s got the maturity to play the role really intelligently and [he] took the ball under pressure, pressed intelligently.

“So, actually it was in many ways a better experience than strolling through the game at five, six or whatever, even though we probably all could have done without it. “