Darwin Nunez: Are Liverpool striker’s missed chances a blip or cause for concern?

Darwin Nunez might have cast some envious glances at Wout Faes’ finishing during Liverpool’s game with Leicester on Friday night.

Granted, Faes’ two goals were in the wrong net as far as the Foxes defender was concerned, gifting Jurgen Klopp’s side a 2-1 win that puts them within touching distance of the top four heading into 2023.

But while Faes scored with unwanted ease, Nunez’s wastefulness in front of goal continued as he missed a hatful of chances to give Liverpool a far more comfortable margin of victory.

The 23-year-old’s most notable efforts came in the second half as he sliced wide from close range, before lashing high over the bar when in a good position.

They followed on from some big misses in the Carabao Cup defeat to Manchester City on 22 December and in the 3-1 win against Aston Villa on Boxing Day.

“On another night, Nunez could have had a hat-trick,” said former Liverpool defender Jamie Carragher, who was commentating on the game for Sky Sports.

“He is a handful, but to make that next step, become a world-class striker, he needs to get the goals.”

The statistics will make for frustrating reading for Nunez. 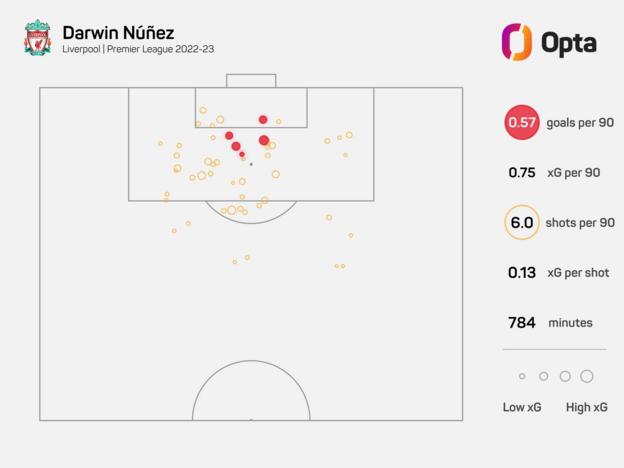 He has had 52 attempts on goal in the Premier League this season but scored just five goals, while he has missed more big chances in the league (14) than any other player.

But the struggle to score is not for the lack of trying.

Nunez has hit the woodwork more times (five) than any other player in the Premier League so far this season, and it was his chipped effort that hit the post against Leicester that led to Faes bundling in his second own goal of the game.

Prior to this fixture, Klopp likened the forward’s struggles in front of goal to Robert Lewandowski’s early days at Borussia Dortmund – before the Poland striker became one of the most prolific forwards in world football – and after Friday’s win he was glowing in his praise of Nunez.

“It was a brilliant performance tonight,” Klopp told Sky Sports.

“People look at stats and whatever but the goal, which was an own goal in the end, was a clear improvement on recent situations, he chipped the ball really good.

“Other moments were also really good. He took out three players with one move before passing to Mohamed Salah. It was really special and I am really happy with that.”

Former Manchester United defender Gary Neville is confident the goals will soon come for Nunez and that within a couple of years he will more than justify the initial £64m Liverpool paid Benfica to secure the Uruguayan last summer.

“He is a handful,” Neville said on Sky Sports. “If he scores the goals he is world class.

“I have a feeling he could be that world-class striker in a year or two.

“I think he will get bigger and stronger in this league the more he plays and I think it will start to happen for him in front of goal.”