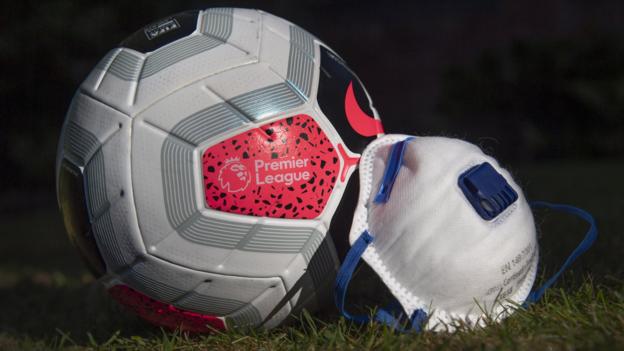 One player and two staff at Watford and Burnley assistant manager Ian Woan are among six positive Premier League tests for coronavirus.

The other two are at a third club, the details of which have not been revealed.

Players and staff who have tested positive will now self-isolate for seven days.

It comes as squads started non-contact training on Tuesday, as the Premier League steps up plans for a restart.

A total of 748 players and staff from 19 clubs were tested. Norwich City did their tests on Tuesday.

Watford confirmed a player and two members of staff had tested positive but they would not be naming those involved as they had asked for medical confidentiality.

Before the news about Watford’s positive tests emerged, captain Troy Deeney said he would not return to training because he feared for his family’s health.

“We’re due back in this week. I’ve said I’m not going in,” Deeney, 31, told Eddie Hearn and Tony Bellew on the Talk the Talk YouTube show.

“It only takes one person to get infected within the group and I don’t want to be bringing that home.

“My son is only five months old. He had breathing difficulties, so I don’t want to come home to put him in more danger.”

Burnley said Woan was “asymptomatic” and “currently safe and well at home”.

“He will remain in close communication with club personnel regarding his re-engagement in training once he is clear of the virus,” the club added.

The Premier League has been suspended since 13 March because of the Covid-19 pandemic, with 92 fixtures remaining.

The league had previously identified 12 June for matches to possibly start again, but there is now an expectation this will need to be pushed back.

“The Premier League is providing this aggregated information for the purposes of competition integrity and transparency,” it said in a statement.

“No specific details as to clubs or individuals will be provided by the league and results will be made public in this way after each round of testing.”

Clubs were permitted to test up to 40 personnel and some did not use their full allocation, while some samples are still to be processed.

At Monday’s “Project Restart” meeting, English top-flight clubs agreed to stage one of the return-to-training protocols.

As well as training in small groups of no more than five, sessions must last no longer than 75 minutes for each player. Social distancing must be adhered to.

Official protocols sent to players and managers last week, and obtained by the BBC, revealed corner flags, balls, cones, goalposts and even playing surfaces will be disinfected after each training session.

Ongoing measures in further guidance include twice-weekly testing as well as a daily pre-training questionnaire and temperature check.

While every case of coronavirus is, of course, a cause for concern, the Premier League will no doubt draw confidence from the fact that the number of positive tests revealed on Tuesday was as low as six.

In one sense, this is six too many. But, had it been significantly higher, it would have raised more serious questions over clubs’ return to training. So, this is a boost to those hoping for a resumption of the season next month.

Last weekend, the Office for National Statistics suggested that one in 400 people had coronavirus outside hospitals and care homes, a rate of 0.25%.

Why the rate among the players and/or staff of the 19 Premier League clubs tested is higher at about 0.8% (so far) is unclear. By comparison, the Bundesliga recently recorded 10 positive results from 1,742 tests. But one should be wary of drawing too many conclusions from this first batch of tests.

With some players and managers having voiced their worries, and half of club medics feeling insufficiently consulted, further hurdles remain, especially when it comes to getting agreement over the protocols for full-contact training.

However, this is at least another small but important step for “Project Restart”.

The German Bundesliga became the first major European football league to restart after the coronavirus shutdown when it resumed behind closed doors over the weekend.

It took the Bundesliga nearly five weeks from starting non-contact training to playing matches. After Monday’s announcement by the Premier League, that timeframe would mean either 19 or 26 June for a potential restart in England.

Every team in Germany’s top flight has been in quarantine, going from a hotel to their training ground for the week leading up to the restart.

On Monday, the Premier League’s medical adviser Mark Gillett said discussions will take place in the coming weeks over whether clubs would have to isolate in a hotel for 14 days before play resumes.

Testing ‘does not impinge’ on NHS

For the Premier League to complete the season, it could require about 40,000 privately conducted tests.

The tests are being carried out by digital health company Prenetics.

Avi Lasarow, chief executive of Prenetics EMEA (Europe Middle East Africa), told BBC Sport that “categorically” none of the tests the company will carry out for the Premier League could have been used by the NHS.

“We of course do not impinge or take away from any testing the NHS is doing,” he said.

“All the tests are privately sourced, as well as the other areas of the supply chains, so they are definitely not taking away from the NHS.

“The government has an infrastructure capability which has been developed to scale up to mass testing volume. It is very clear that we can now see that happening and as an organisation if we were asked to provide additional services we would prioritise that.”

Lasarow added that the tests are 98.8% accurate, which will improve with repeated testing of Premier League personnel, and that the company is able to turn around results in 48 hours.