Christian Eriksen back in Denmark squad 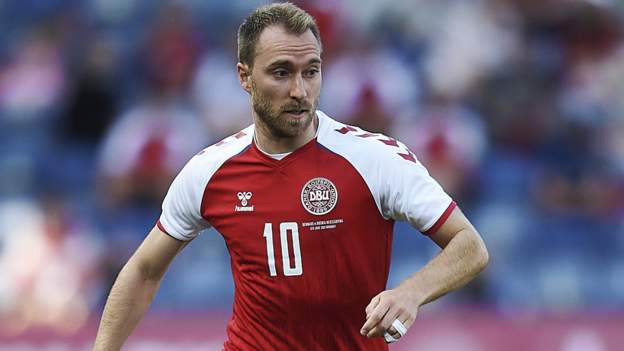 Last updated on 1 hour ago1 hour ago.From the section Football

Christian Eriksen has been named in Denmark’s squad for the first time since his cardiac arrest while playing at Euro 2020 last summer.

He joined Brentford in January following his release by Inter Milan.

Denmark play friendlies in the Netherlands on 26 March and at home against Serbia three days later.

Eriksen will join up with his international team-mates for training in Spain prior to the two games.

He joined Brentford on a six-month deal after his release by Inter Milan and made his first appearance for the Bees as a substitute in a defeat against Newcastle United on 26 February.

The former Tottenham Hotspur midfielder was given a standing ovation from fans and players on both sides when he came on after 52 minutes.

He said afterwards: “If you take away the result, I’m one happy man. To go through what I’ve been through, being back is a wonderful feeling.”

Inter Milan and Eriksen agreed to cancel his contract in December because players fitted with an ICD cannot compete in Serie A. The Premier League does not however have the same regulations.

After leaving the Serie A club he trained at Odense Boldklub, the Danish team he represented as a teenager, before signing for Brentford.

Following the game against Newcastle, Eriksen played the full game for Brentford in wins against Norwich City and Burnley.

He set up Ivan Toney for a goal in the 2-0 victory against the Clarets and has been impressive as the Bees have moved away from the relegation zone.

Denmark qualified for the 2022 World Cup in Qatar by finishing top of their group with 27 points from 10 games – four points clear of runners-up Scotland.