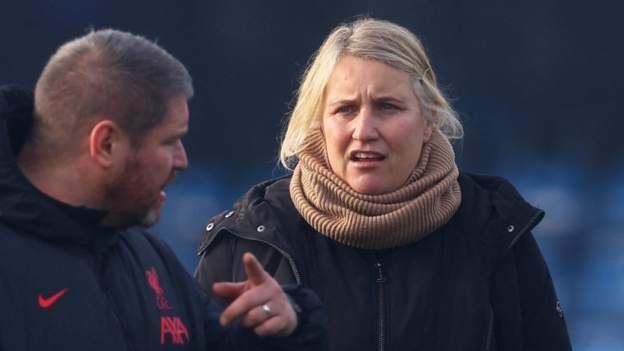 Chelsea manager Emma Hayes says women’s football must be “taken more seriously”, after her side’s game against Liverpool was abandoned due to a frozen pitch.

Just six minutes had gone when referee Paul Howard took the teams off.

The game had kicked off as scheduled at 12:30 at Kingsmeadow in Kingston upon Thames following a pitch inspection.

“We have to say that it’s time for undersoil heating,” Hayes told BBC Two. “The game should never have started.”

Chelsea had been hoping to extend their four-point lead over Manchester United at the top of the Women’s Super League.

“It’s not for managers to decide if it’s on – it’s up to the FA and officials,” Hayes added. “We have to say to ourselves that it’s time for undersoil heating. We’ve got to take our game seriously. Yes, we can have our blowers and pitch tents but it’s not enough.”

Liverpool manager Matt Beard agreed that the game should not have started, and was surprised to be told it would kick off at the scheduled time.

“Chelsea have done everything they can to try and get the game on,” he said. “I’m surprised it kicked off at 12:30 because we got told this morning that we could try and kick off the game at 14:00, but we got the phone call to say that the game was back on at 12:30. I was a bit surprised.

“The temperature was not going to change all day. It’s only going to get colder now.”

Former England and Brighton manager Hope Powell echoed the two managers’ sentiments, saying the situation was “embarrassing” for the game.

“They should have cancelled it before, the pitch was hard and I was dubious it would go ahead. But to start the game and then realise five minutes in it was dangerous to many players is very embarrassing. It is not a good look.”