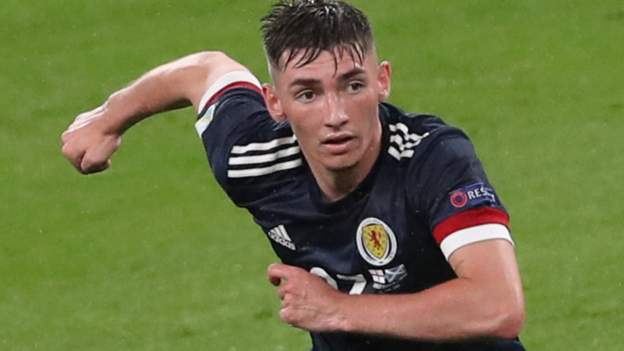 Billy Gilmour has tested positive for Covid-19 and will miss Scotland’s crucial Euro 2020 match with Croatia on Tuesday.

The Chelsea midfielder was a standout as Steve Clarke’s side drew 0-0 with England on Friday on his first start.

The Scottish FA currently say there are no close contacts identified from inside the camp, with 25 players fit to face Croatia.

Scotland must win at Hampden to have hope of progression from Group D.

Both sides have a point after two matches while England and the Czech Republic are on four points prior to their meeting at Wembley.

If Clarke’s side did advance, Gilmour, 20, would also be ruled out of playing in the last-16 round.

“The Scottish FA can confirm that a member of the Scotland national team playing squad, Billy Gilmour, has tested positive for Covid-19,” the SFA said.

“Having liaised with Public Health England since the positive test was recorded, Billy will now self-isolate for 10 days and therefore miss tomorrow’s Uefa Euro 2020 Group D match against Croatia at Hampden.”

Match play is not considered close contact and England’s players and support team all returned negative tests on Sunday.

Scotland squad member John Fleck tested positive for coronavirus before the tournament and missed the 2-2 friendly draw with the Netherlands, along with six players left out as a precaution.

Those six players returned in time for the 1-0 friendly win over Luxembourg and Fleck was available for Scotland’s 2-0 defeat by the Czechs and the draw with England.