Andy Murray and Johanna Konta are among Britain’s leading male and female players joining up to compete in a unique team tournament this week.

The Battle of the Brits Team Tennis event will start in Roehampton on Monday and culminate on Sunday.

Two teams of 13 – selected by non-playing captains – will chase points in singles, doubles and mixed doubles.

Eight matches a day will be played over two outdoor courts, with a 10-point tie-break replacing a third set. Points will be awarded on an increasing scale as the week progresses.

Prize money will be awarded and donations will also be made to charity.

The BBC Sport website and BBC iPlayer will have live streaming from two courts at the National Tennis Centre from 11:50 BST every day.

Selected text and radio commentaries will also be on the BBC Sport website and BBC Radio 5 Live Sports Extra over the week.

Who is playing and what is the format?

While three-time Grand Slam champion Murray and world number 14 Konta are the star names, there is a depth of talent taking part.

Konta, who is a three-time Grand Slam semi-finalist, is joined in the British Bulldogs team by former world 14 Kyle Edmund and British number three Cameron Norrie.

Each team will have two captains – Judy Murray and Greg Rusedski take charge of the Union Jacks, with Leon Smith and Anne Keothavong leading the British Bulldogs. 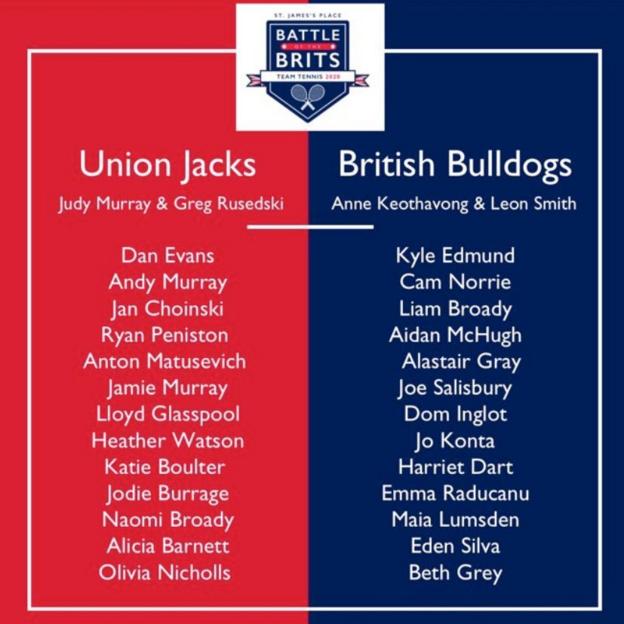 The exact format has not yet been confirmed, but there will be singles, doubles and mixed doubles matches every day. The first team to accumulate 60 points will be the winner.

Jamie Murray says he has some ideas to help create a good atmosphere in the absence of spectators.

“We’ve got team benches on each of the two match courts. The idea is to pack those out as best we can and get a lot of interaction between the players who are competing and those who are supporting,” said Murray, who organised an inaugural Battle of the Brits event for the leading men last month.

“The captain element should make it good fun as well.”