Battle of the Brits: Andy Murray beaten by Kyle Edmund 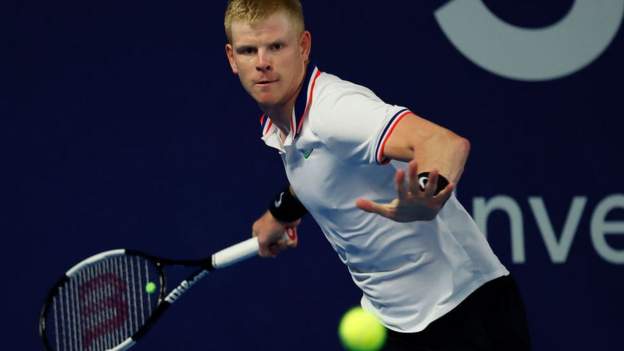 Kyle Edmund won a physical battle against Andy Murray to reach the Battle of the Brits semi-finals.

The encounter was billed as good gauge of where Murray is after a pelvic injury and there were some positives.

The six-day charity event, organised by Murray’s brother Jamie, is at the National Tennis Centre in Roehampton.

Three-time Grand Slam champion Murray has slipped to 129 in the rankings because of injury lay-offs but Edmund said he still felt under pressure against him.

“Everyone wants to win and do their best. You are still playing Andy Murray, a guy who has won so much,” the British number two and world number 44 said.

“I was expecting too much from myself. I wanted to play too well, I think.

“Today was the kind of match a few years ago I wouldn’t have won but today staying in the match counts for a lot and builds pressure.”

Murray had got off to a winning start against Liam Broady on Tuesday but against a player ranked 211 in the world that was more of a morale boost than a true measure of fitness.

This encounter against the former world number 14 was billed as one that would provide more answers on that score.

The 33-year-old Scot matched Edmund throughout the first set, looking sharper and more aggressive than he had the previous day, and capitalised on his opponent’s errors to take control of the first-set tie-break.

He fell a break behind in the sixth game of the second set when he sent a backhand into the net but immediately broke back as a previously high quality match became a little scrappy.

There were some reassuring glimpses of the Murray who was world number one before hip surgeries and pelvic injuries derailed his career, a classic double-handed backhand down the line sealing the opening point in the second-set tie-break.

But there were signs of fatigue too and as the mistake count rose, so did the volume of the mutterings to himself – even more audible on a court with no fans because of the coronavirus pandemic.

The match tie-break slipped away and a wayward backhand return handed Edmund victory, leaving Murray facing a winner-takes-all encounter with Ward on Thursday.

While this performance answered some of the questions over how competitive Murray can be, the next one will provide clues as to how well his body can cope with three matches in three days.

Broady out and Clarke injured

Broady was eliminated with a 6-4 6-1 defeat by Ward in the other match in the Tim Henman Group earlier in the day.

In the Greg Rusedski Group, Cameron Norrie survived a scare against world number 393 Ryan Peniston, coming from behind to win 3-6 6-1 10-4.

Peniston, 24, was a replacement in the draw for 18-year-old Jack Draper, who pulled out with an abdominal injury.

Meanwhile Jay Clarke, who was due to play Peniston on Thursday, has withdrawn from the event with a knee injury he sustained in his defeat by British number one Dan Evans on Tuesday.

In the doubles, Joe Salisbury and Jonny O’Mara beat Peniston and Dom Inglot 6-4 6-2, while Evans and Lloyd Glasspool came from behind to triumph 4-6 6-3 11-9 against Norrie and Broady.