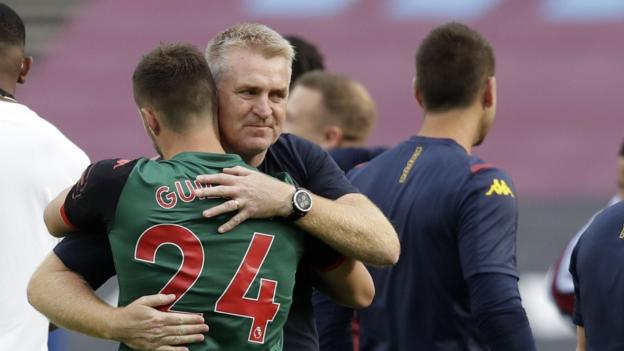 A draw at West Ham was enough to keep Villa up with Watford and Bournemouth joining Norwich in the Championship.

Villa were promoted via the Championship play-offs in May 2019, three years after being relegated.

“I’m emotional, pleased, proud – all the adjectives to go with it. It’s a magnificent achievement,” said Smith.

“My condolences go out to Hayden Mullins and Watford and Eddie Howe at Bournemouth. I can only think about how they feel now. Eddie is a fantastic manager, coach and person.

“But it had to be two out of three go down and I am proud of a magnificent achievement by Aston Villa.

“It feels better than getting up through the play-offs last year. We will now have a few drinks and celebrate.”

‘We used the pandemic really well’

Villa were one of the first teams to play when the Premier League resumed following a three-month suspension caused by the coronavirus pandemic, with a 0-0 home draw against Sheffield United leaving them in the bottom three.

As recently as 12 July, they were seven points adrift of 17th place, but their first four-game unbeaten run of the season saw them to safety, with the point at West Ham one of eight they earned in that time.

“Up to the pandemic, a lot of people had us relegated,” added Smith to BBC Sport. “We have had to work extremely hard.

“I thought we used the pandemic really well. We’ve been solid defensively, we have looked strong and managed to stay in the Premier League. It is something to build on.

“We sat down in Minneapolis [on a pre-season tour] over a year ago and came up with three words between us as to how we wanted to be known – and they were: togetherness, prepared and relentless.

“It takes a long time to build a culture but we are growing into that.”

‘The squad have grown into Premier League players’

Villa spent more than £118m on new players in the 2019 close season before their return to the Premier League, some of whom had spent the previous campaign on loan at the club and helped them to their play-off final win over Derby.

Only Real Madrid, Atletico Madrid, Barcelona and Juventus paid out more than the club that summer.

“A lot has been made of what we spent in the summer, but we had to,” said Smith. “We had to build a new squad. There were 12 players coming into the building.

“I would have said this if we had stayed up or not – it’s £9.5m per player and we have lost some big players to injury this season.

“I feel as the season has gone on, they have grown and become Premier League players. We have to build on it and be smart in our recruitment over the summer.”

One player whose future at Villa will inevitably be discussed in the media this summer is Jack Grealish, who scored their goal at West Ham on Sunday and has been their standout performer this campaign.

“What happens now? He comes out and gets drunk with me,” added Smith.

“Will he stay? I’m certainly hopeful; he’s contracted for another two or three years. He’s a Villa fan. He’ll be immensely proud to have scored the goal today to keep us in the Premier League.”