An unexpected chance for Balotelli – can Mario fire Italy to World Cup?

Mario Balotelli’s call-up to the Italy training camp, more than three years after his last cap, has raised eyebrows both in his homeland and around Europe.

The 31-year-old, who now plays in Turkey for Adana Demirspor, is one of 36 players named for a three-day camp as Roberto Mancini looks at his options for March’s World Cup play-off semi-final with North Macedonia.

The national team need to win two rounds of play-offs to qualify for Qatar after finishing second to Switzerland in qualifying, just months after winning Euro 2020.

Italian football journalist Daniele Verri says the potential return of Balotelli, who has scored 14 goals in 36 caps, is like the manager “going back to a second-hand car” but thinks fans “owe Mancini some faith”.

Balotelli has impressed this season – the “most disciplined and devoted” member of his team according to a Turkish writer – and seems to have avoided off-field antics.

How has it come to this, how has Balotelli fared in recent years and is this a gamble which could pay off? 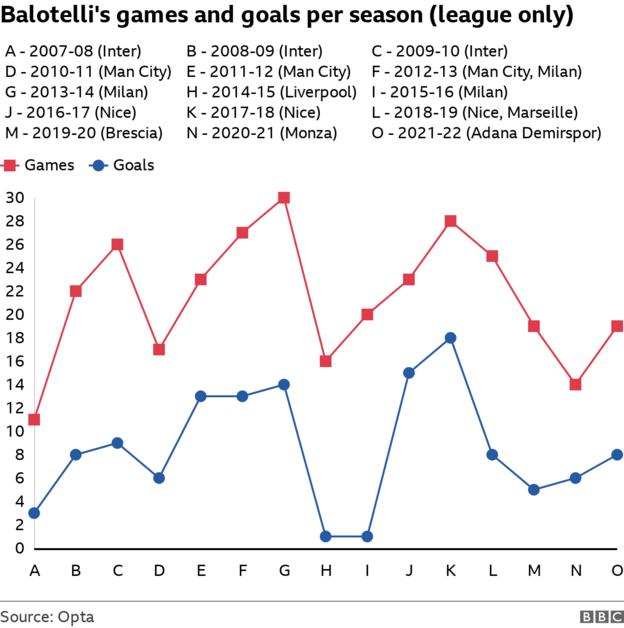 Balotelli was once one of Europe’s hottest prospects, winning the 2010 Golden Boy award for the best young player in the world.

By the age of 21 he had won three Serie A titles, a Coppa Italia and a Champions League title with Inter Milan and the Premier League and FA Cup with Manchester City – an Italian treble with Jose Mourinho and the rest under Mancini.

He was well known for his off-pitch shenanigans at City – but the performances were often worth the hassle.

Then the decline came. Italy went out in the group stages of the 2014 World Cup, with Balotelli not playing international football again for four years, and then he hit only one Premier League goal in a terrible spell with Liverpool.

He seemed to have a career renaissance at Nice in Ligue 1 with his best two league goal totals – 15 and 18 – and broke back into the Italy set-up with three caps in Mancini’s early games.

But he fell out with Nice boss Patrick Vieira and has played for four clubs in the past three years – failing to reach double figures in the league for any.

He played for Marseille for six months, Brescia for a year as they were relegated from Serie A, Monza for six months in Serie B and then his summer move to Turkey.

Balotelli has helped promoted Adana Demirspor, who are in the top flight for the first time since 1995, to fourth place.

He has scored nine goals in 21 games since moving to Turkey.

Yakup Cinar, a sports journalist for Turkish newspaper Fanatik, said: “Balotelli showed that he came here to play football with his performance in the Super League.

“Off-the-field events have not been talked about much.

“Club president Murat Sancak had previously said that Mario preferred Adana Demirspor so he could join the Italian national team, despite receiving offers from Qatar.

“I can say that he is the most disciplined and devoted player of the team at the moment.

“Happiness and peace in the city of Adana opened the doors of the Italian national team to him again.”

Why are Italy looking at Balotelli again? 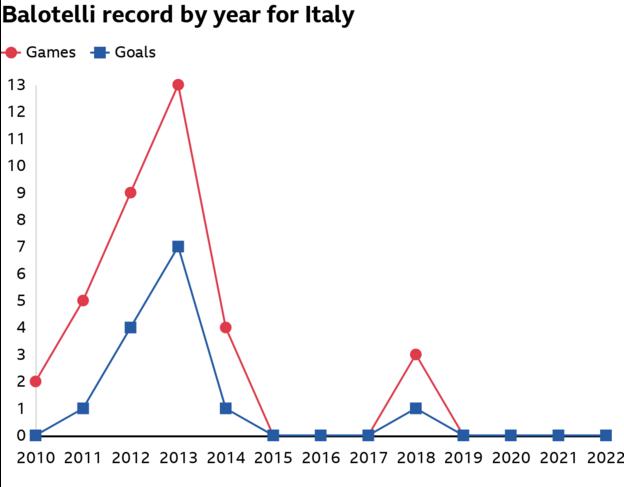 “Technically, Mario has always been good, it’s not a problem. We have to see where he is physically. We’ve lost sight of him a little bit,” Mancini said.

Verri said: “Going back to Balotelli could look like a step back.

“But I think we owe Mancini some faith and some trust because it’s mainly down to him that we’re European champions.”

Most of Italy’s regulars are in the 36-man squad, along with Balotelli and several uncapped players.

Italy’s striking options are not great – hence the Balotelli inclusion. His last competitive goal for Italy was against England at the 2014 World Cup.

He is one of only two players in the 35-man squad to reach double figures for Italy on 14 – behind Lazio’s Ciro Immobile, who has scored 15.

“Mancini deserves the right to do this in my opinion,” said Verri. “He has to have the opportunity to test all the players. He knows Balotelli and what he can do. There is a lovely relationship between the two.”

Could the gamble pay off?

“Maybe it’s wrong but if Mancini qualifies with or without Balotelli, nobody will care how he got there,” said Verri.

A place in this 36-man training squad does not mean he will definitely be in the squad to face North Macedonia.

“The problem with Balotelli is there will be a massive discussion from now until the games in March about whether he’ll be there or not,” said Verri.

“Mancini has put all his cards on the importance of the group. Balotelli is not a player who is good for the group, we’ve seen it. He is not a team player.”

Mancini himself said: “What is fundamental is that a player is integrated into an existing group, a group that has had good results.”

The last time Balotelli played in European competition was February 2018.

The majority of Italy fans are against the move because he has had so many chances – and concerns about what this call represents.

“It feels a bit like a step back in a direction everyone in Italy wanted to consider part of the past. It’s not just Balotelli, but also the way of thinking of the extreme present,” said Verri.

“Being European champions now is part of a project that started on the ruins of the missed qualification of the last World Cup.

“Mancini arrived and started creating a new mentality and doing everything different. All of a sudden now it really looks like we are struggling.”