Five years is a long time to be missing from international action, even more so when you are one of the game’s global superstars.

But Norway’s Ada Hegerberg showed she is hungry to make up for lost time after helping the two-time European champions get their Euro 2022 campaign off to a flying start against tournament debutants Northern Ireland.

The inaugural Women’s Ballon d’Or winner was missing from the scoresheet as Norway won 4-1.

But she did pretty much everything else in a victory that took Norway top of Group A before their meeting with England in Brighton next Monday (20:00 BST).

She showed great awareness to set up Frida Maanum to make it 2-0, was denied by a superb interception by Abbie Magee and had a goal ruled out for offside in the second half at Southampton’s St Mary’s Stadium.

“Hegerberg was very unselfish,” Gail Redmond, the former Northern Ireland international, said on Match of the Day Live on BBC One.

“If she had actually pulled the trigger, she could have had a couple of goals herself.”

Back from international wilderness

Hegerberg, the all-time top scorer in the Women’s Champions League, left the international set-up in 2017, protesting against what she felt was a lack of respect for female footballers in Norway.

At the time, she described her experiences with the national team as “deeply depressing” and that they gave her nightmares.

Hegerberg, a six-time Champions League winner with Lyon, lifted her self-imposed exile from international action earlier this year, marking it with a hat-trick on her Norway return against Kosovo.

“No player should feel the need to step down from the national team,” Hegerberg told BBC Sport. “Players have a tremendous position to inspire and push for change.

“Coming back was a huge moment for me. I felt it was the right time. I took a decision in 2017 that I stood by. But I had lot of time to reflect, on many aspects.”

She played with style as Norway overpowered Northern Ireland, contributing four goal attempts – one on target – and two key passes.

Jonathan Pearce, who was commentating for Match of the Day, added: “Hegerberg would be better for a goal.

“I know that sounds ridiculous when you have scored 42 international goals, but Hegerberg needs a goal and I think Norway would be a better team when she gets that goal.” 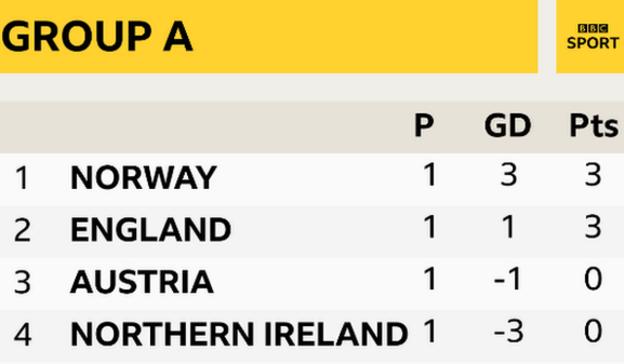 ‘England will be a different level’

Six-time finalists Norway proved too strong for the lowest-ranked side at Euro 2022.

Norway are not among the favourites at this tournament but the presence of Hegerberg, who returned from serious injury last October after 20 months out, makes them dark horses.

The 26-year-old helped run the show against Northern Ireland but she is expecting a different challenge against the Lionesses next week.

“The first game is all about getting into the rhythm and getting the first win,” Hegerberg, speaking to Sky Sports, said.

“I thought we deserved our win and we are happy tonight, but tomorrow we will analyse and move on because it’s going to be a different level on Monday.

“I expect a tough match. They are the host country, a great team with strong players who are in form. It’s going to be a big challenge for us.”